Miss Serendipity.......she is a funky, whimsical lady who comes and goes as she pleases with nary a 'by your leave'.  Then one morning you open the door and there she is with that wry, all knowing smile on her lips.....at first you feel a little edgy, even a little wary......you start looking over your shoulder wondering what she has in mind for you this visit....

It all started off innocently enough......

I was up at 5:30 am Monday to get a cup of coffee in me before heading out into the cold, damp morning air to stow the Winegard Carryout, take down the lights, unhook all the plumbing and electrical connections, fold up the awning mat, and hook up the trailer.....it took all of two hours to get it done, but shortly after 8 am we were rolling down the long driveway to the street and on our way.   TLE followed me in the VW as we drove up to Joel's Automotive to get previously scheduled work done on the coach.  The night before Miss Serendipity had gifted us another 'check engine' light on the VW......I was so dismayed as I drove over to Smart and Final to buy some firewood when that dang light appeared once again.  I was hoping it was still something to do with the 'knock sensor' code we had gotten a couple of times previously.......the operative word is 'hoped'.

We arrived at Joel's just after 8:30, dropped the trailer on the street, and pulled the coach into the shop driveway.  On tap for Monday was a new 'pair of shoes' for the Newell (4 rear drive tires), an oil change (21 quarts of Delo 100 40 wt), new fuel filters, and recharge the dash A/C (1 pound of freon)......but, first up was to hook up the code reader to the VW to see what that bright yellow 'check engine' light foretold.......it wasn't the knock sensor.....drat!  They had to let the VW completely cool down before running some tests so there went at least 3 hours.

Next up the 4 tires Joel ordered were sent to a shop out in San Bernardino in error, and could not be retrieved until almost 4 pm, and that was not acceptable.  We found 4 other tires that could be delivered by 1 pm......sound of grinding teeth can be faintly heard by the discerning listener.  So, our Jello plans to be in Quartzite before sundown evaporated before my very eyes.

While Miss Serendipity was running circles around my jello plans throwing all kinds of 'serendipity dust' into the air we decided to meet up with Meredith, Tim and Laila at Rabi's Cafe (just a block up the street) for breakfast.  Tim and I had their amazing 'Chicken Fried Steak'......OMG!  We spent about 2 hours together and it was a fitting an 'until next time' breakfast as I will ever have.  We parted ways with hugs and kisses and headed back to Joel's. 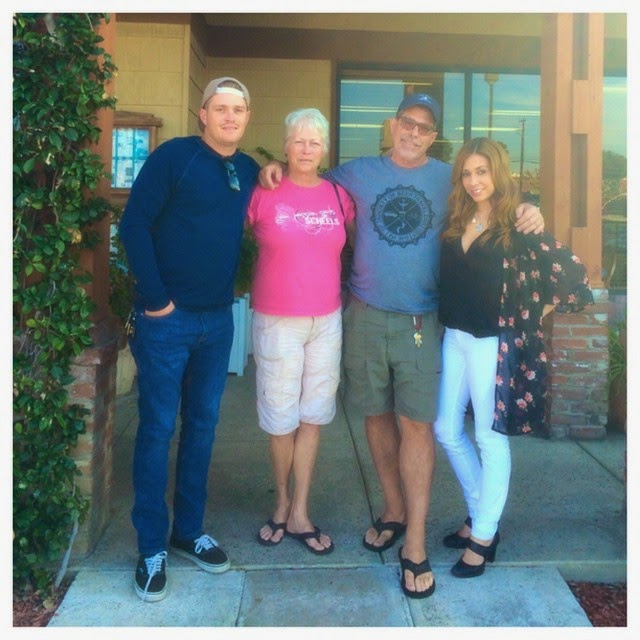 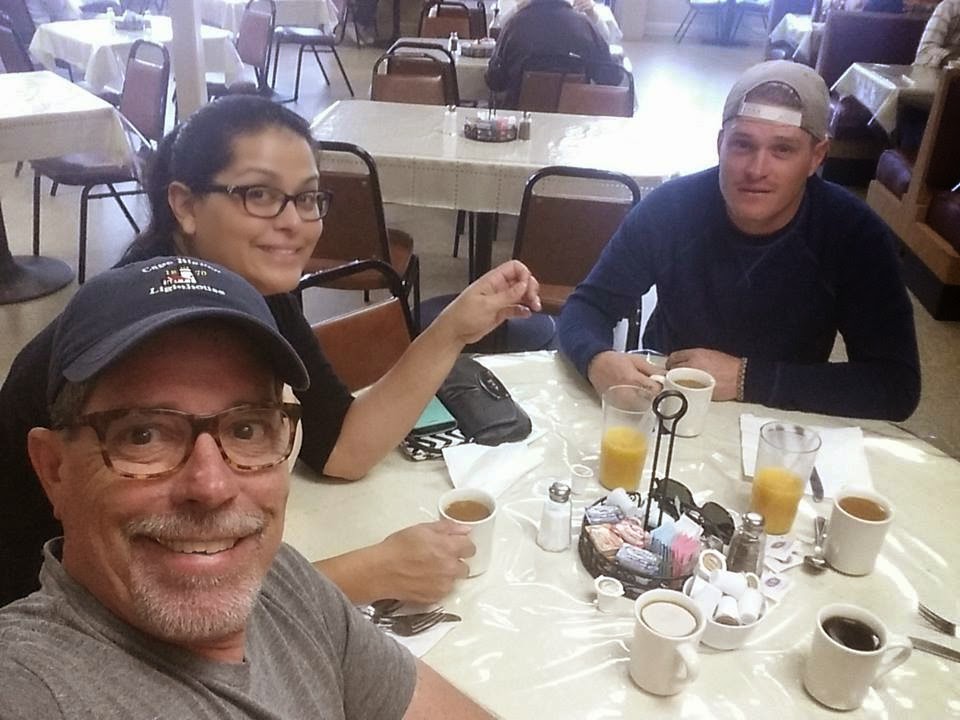 My arm wasn't long enough to get everyone in the picture

Just after we returned to Joel's the mechanic assigned to the VW called me over to show me what the problem was......a pvc valve had cracked (why are those things made out of plastic?) which was causing the engine to misfire resulting in the 'check engine' light.....a $68 part and an hour of labor.....seems simple, no?  Well, they did not expect to get the part until late Tuesday morning, and could not promise to have the car ready to roll until early afternoon.......grrrrr!  Now getting to Quartzite before sundown Tuesday was going out the window.  You may wonder why sundown is such an obstacle to me.....I don't like arriving in an unfamiliar area at, or after sundown......especially a place like Quartzite where trying to find someone in a maze of hundreds and hundreds of RV's is difficult in broad daylight.

The 4 new drive tires arrived about 1 pm, and were installed on the coach within 90 minutes.......they look great!  I checked the date codes and they were made in October of 2014....perfect.  I discovered, however, that the old tires had date codes for December of 2007.....that means they were 7 years old, not 6 like I thought.....note to self.....check the date codes before the tires are installed.  Thankfully we had no catastrophic failures.

Since we were going to be at Joel's until after 5 I suggested to Sharon and Rod that they meet us for a late lunch at the local In 'N Out Burger, so they came by the shop about 2:20 to pick us up and we were off to In 'N Out and a Cheese Burger combo for me.   This particular store has a large outdoor dining area, which worked perfectly for us.

We were back at the coach a little after 3:30......finally around 4:30 they got to work changing the oil and filters, then charged up the dash A/C.....so nice to have 40 degree air blowing out of those vents once again.....YAY!  We'll be glad we have the A/C when we visit Texas in late February and March.

So, what to do?  We're not leaving town, and I don't want to re-insert the coach in Kate's backyard, so we fell back to plan B.....Rancho Jurupa.  TLE called and got a site for one night, plus the gate code as we knew we would be arriving close to 6 pm, which we did.  I quickly plugged in, cranked up the satellite dish, took a much needed shower, and sat down to relax.

So, you might wonder, what was the upside of Miss Serendipity's visit this time around?  Here is my take.....we got to spend several more hours with 3 of our kids, our new son-in-law who we just adore, and Tim's girlfriend, Laila.  Plus I had plenty of time while at Joel's to reconnect the cables to the satellite dish, which I hadn't done earlier due to to lack of time, and clean the crap off the roof that had dropped on to it from the tree we were under for a month.

Thanks for stopping by!
Posted by Whatsnewell at 8:28 AM