No matter where you work, even in a fun workamping job such as we have, you will find human nature flourishing.  We've had a problem with gossip, and Thursday Miguel attempted to 'nip it in the bud' by having an employee meeting to get it under control......but, as usual, I get slightly ahead of myself.

Thursday was another idyllic weather day in South Lake Tahoe......mostly blue skies with a steady stream of puffy white clouds scudding across those same skies.  The temp dipped back into the high 60's, and there was a slight breeze, but, as I said, it was idyllic.  Our agenda remained the same as we rush to finalize all of our preparations for the opening of our summer season on Friday, May 26th.  TLE and I arrived at TVC April 23rd, and it is difficult to believe how much has been accomplished in just 4+ weeks.

My 'Ranger Crew' continued spreading wood chips along both sides of our entrance to cover the bare dirt, and give it a fresher look, continued refreshing all of the painted traffic markings along the entrance and in front of the office/store, and continued getting the pool area up to snuff.

Meanwhile, our new activity directors, Michael and Mary, produced their first 'Activity Calendar' for the Memorial Day weekend, and is it ever packed....... 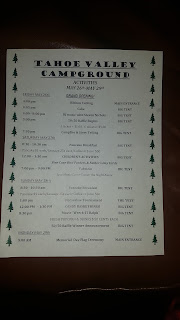 ......everywhere I go I can see all the rough edges in the park disappearing.  To say that we are one month ahead of prior years would be an understatement......we are way ahead of our usual understaffed pace of prior years.

We had 44 arrivals Thursday, and it seemed as if they all arrived in a 90 minute span......our entrance registration line went from having one RV, to 12 within 10 minutes.....suddenly I was back in the saddle directing traffic, and sending folks to their sites first to clear the line, and ease the pressure on the office staff.  Friday we will have 155 arrivals, and the halcyon days of early May will be a distant memory.....at least for one weekend.

Now, back to the 'gossip' problem......as is oft the case it is just one, or two folks who repeat half truths, and a few that listen and repeat it, instead of cutting it off by saying "I don't want to hear this!".  Around 2 pm Miguel sent out a call over our 2-way radios that there would be an impromptu employee meeting.  As anyone knows, gossip is poison no matter where it occurs, and I am glad Miguel has stepped in to quell it quickly before real damage is done.

I was off by 4:30 and on my way over to Higher Ground Autoworx to pick up the VW......John replaced a defective PCV valve, and replaced a bolt on our turbo that kept 'backing' out.....he believes these two issues have caused the balance of the fault codes he found in the VW computer......in all it cost $190.......not bad.

We had a lovely evening watching the recorded finale of the 34th season of Survivor.....Sarah won, and rightly so.....it was a crazy season with so many 'blind sides' and unexpected turns, but another great season, nonetheless.

When you need to buy something from Amazon, think of us.......we will appreciate every purchase you make using our Amazon Affiliate link, and  remember, using our link will not add one penny to your purchase, plus we will receive a small commission.
Posted by Whatsnewell at 6:25 AM