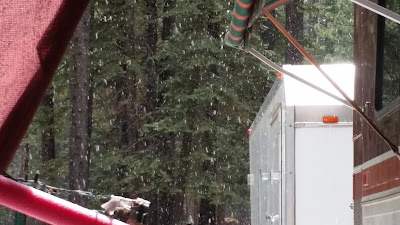 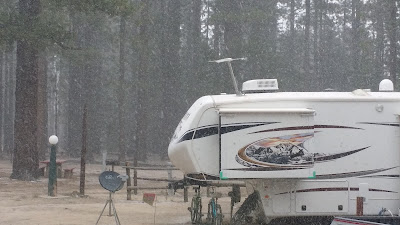 ......yes it did!  But pictures can be deceiving......while it looks like it is coming down by the bucket loads these brief flurries would only last 10-15 minutes, then the sun would return.....no snow ever stuck to the ground.  I guess it was the best of both worlds.....we got to see it snow, but never suffered the consequences.  As I type this morning it is dry outside with no evidence whatsoever remaining of the on and off snow flurries all day long.

Since we knew we would have cold, snowy, rainy weather Friday we planned to hang around the coach all day, and that is what we did.....well, what I did.  TLE did go shopping at Raley's and KMART.....whenever she goes shopping by herself she does what I do in Home Depot....walks every aisle.  When she returned I drove the car over to the office to pick up Wesli's bike to do some repairs.  The shifters were not working, so I decided to replace her handlebars, brake levers and shifters with some of the stuff I salvaged a week ago from two other abandoned bicycles.  In all I spent about 3 hours tinkering with the bike, and in the end it came out quite well.

After delivering the bike back to Wesli about 1:30 I took the rest of the afternoon off to read, and nap.....with all the curtains pulled back we could see the snow come and go all afternoon and into the early evening.

Nothing else to report for Friday.....it's back to work Saturday for our 4th week here at TVC.....the current temperature at 6:13 am is 31 degrees with partly cloudy skies.....more rain forecast for this afternoon with continuing COLD temperatures.......thanks for stopping by!
Posted by Whatsnewell at 6:15 AM