Wonderful, glorious sunshine!  I had my jacket and gloves off before 10 am.....I was wearing shorts and a t-shirt, my preferred attire, once again.....order is restored.  Things are drying out nicely, and it is beginning to feel a lot like spring here in SLT.  Now, do I believe we have seen the last of the winterish weather.......not a chance!  May is always a mixed bag in the Tahoe Basin, and any type of weather is possible......the last two years we have gotten 2-3 feet of snow in mid May.  The long range forecast shows rain coming back around the 19th for a few days, and along with that rain temps back into the 50's during the day.  Oh well, I'll enjoy the short pants and t-shirt weather while I can.

I fully expected to be doing my usual thing Monday, but that's what I get for having expectations, right?  TLE had left to open the office around 8:20, and I was just getting ready to get dressed when there was a knock on my door.....hmmm....I opened the door and Alex was standing there......he asked...."Are you working today?" to which I replied...."Yes".  He then went on to ask if I could help him scavenge some building materials from a mobile home park over at Stateline that is being demolished to make way for a new condo project, to which I replied in the affirmative.  He said he would meet me at the office in about 15 minutes so I got dressed and headed over to the office.

The long and the short of it is our manager, Robert, got permission from the demolition contractor to remove some corrugated roofing, some 4 x 4 posts, and numerous 2 x 6's from a number of mobile home sites.  So, that is what I spent 5 hours doing Monday, and I have to confess.....I am just not cut out for that type of physical activity anymore.  Not that I can't do it.....I did....but the aftermath is the problem......the stiff shoulders, and lower back.  When I was 18 I broke my right shoulder while high jumping in college, and then in 1999 at the age of 49 I broke my left collarbone in a bad mountain bike accident.....now in my dotage they tend to bother me on rainy days, and when I have done a lot of lifting over my head. 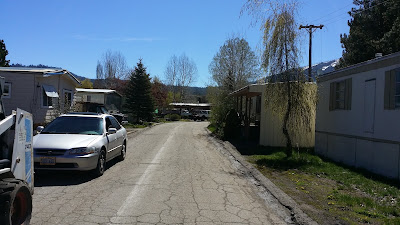 We had a little drama near the end of the day......we had taken two trucks from TVC over to the mobile home park to haul back the materials we acquired.....one is a pretty old Ford F250 flatbed (probably late 60's/early 70's), which has a snow plow mounted on the front, of course.  When we went to leave it would not start....it appeared there was a problem with the battery, or starter solenoid.  We had no jumper cables, so I walked down to another site where some other guys were doing the same thing we were and was able to borrow some cables from them.....it was then I realized how close to the lake we were...... 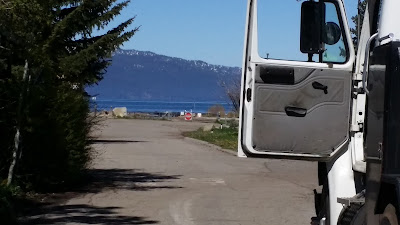 .....anyway, we got the truck started, and headed back to the campground.  I was driving a 1999 Ford F150 pickup following Alex in the aforementioned vintage Ford F250 flatbed.....I guess at some point the brake master cylinder went out on our drive back and he was having to use the parking brake to stop the truck......fortunately we only had to stop at one red light.....a miracle in itself.....on the entire drive back to TVC. To be fair, the Ford flatbed never leaves the park, and only gets driven a few miles a week during the winter plowing TVC after a snow storm.....that it still runs is amazing to me as it sits unused 95% of the time during the year.

At any rate we made it back to TVC unscathed, unloaded our haul, and headed for the office......it was just before 2 pm, and I had not had lunch yet, so I clocked out, took my 30 minute lunch break, and was back by 2:30 to work the last 45 minutes of my shift.  I had not done site checks yet, so I made a quick trip around the park.  I was pleasantly surprised to find that the issues I was greeted with less than a week ago (several RV's with either expired site tags, or no site tags) had either paid up and extended their stay, or left the park.  So, order has been restored in that regard.  Also while Alex and I were gone the other maintenance folk had raked a good portion of the Section G sites I had finished cleaning a couple of days prior.  The park is beginning to look good again after a long, snowy, cold winter!

By the time I clocked out and went home with TLE I was one sore puppy.....my shoulders and back were barking......TLE suggested I take a long HOT shower, which I did, after which she applied some Tiger's Balm, and then gave me a 10 minute massage.  You see? This is why I refer to her as TLE (The Lovely Elaine)!  She really takes good care of me.

There was not much on TV before 10 pm, which is our bed time on days we work, so we watched a movie I had recorded a while back called 'Blackhat'.....a kind of cyber terrorism mystery. IMBD only gives it 2.5 stars, and that is probably about right, but we did enjoy it thoroughly....we would be closer to 3 stars (5 star rating system).

Thanks for stopping by!
Posted by Whatsnewell at 7:36 AM