Knowing we will not be here in SLT* in the summer of 2017 makes this summer feel even more meaningful to TLE and I.  We, as a married couple, have been coming to Lake Tahoe since August of 1971.....we came here on our honeymoon.  In fact, we rented a small cabin less than 2 miles from TVC**.  We have been back to Lake Tahoe virtually every year we have been married.  I have often remarked to others unfamiliar with the Tahoe Basin that it has its own unique bouquet......aroma if you will.  Each morning when I step outside the coach I catch that aroma and smile.....a smile of self satisfaction......a smile that belies  100's of memories slowly parading through the recesses of my mind.  I'm sure everyone has a place like this.....a place away from their regular home they long to return to over and over again because of all the good memories fostered by being there.  Lake Tahoe has been a sort of anchor point in our lives....a place we return to often to be recharged, reinvigorated.  After all the years of coming here for a one, or two week vacation being able to come and stay for four and a half months, or more each of the last three summers is a dream come true.  As a child of 4 years old my parents took their first long vacation towing a 20 foot trailer.....on our way back home to SoCal from Zion and Bryce they stopped at a small trailer park up near the north shore of Lake Tahoe called Incline Trailer Park.  The first morning camped on the shores of Lake Tahoe in 1953 I began a 62 year love affair that has never been quenched.....that Lake Tahoe aroma has never changed.....never faltered.....it is always unerringly there when we return each time.  That small trailer park does not exist anymore.  It's lakeside location is now part of the larger Incline Village, which no longer bears any resemblance to that idyllic lakeside setting we first visited back in August of 1953, but the memories linger......they are strong.....they make me happy. 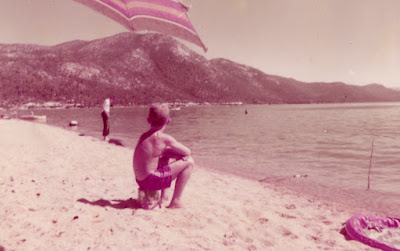 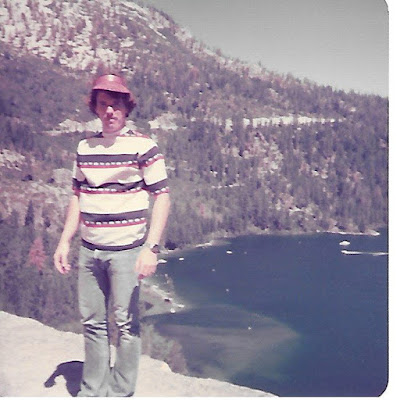 So, what did Monday in SLT look like?  TLE I reported for our first official day of work around 8 am and while TLE got to work re-familiarizing herself with the DigiRez system I got in a golf cart and began to survey the TVC campground.  Winter is always hard on the campground and there is a lot of work bringing her back up to snuff for the summer.  My first order of business was picking up around three of the dumpsters that had been invaded by our local bear population during the night....nothing new there.  Then I swept the sidewalks around the store, and picked up some litter before we all headed to our first staff meeting of the summer.  Robert, the new manager at TVC introduced himself, and then we in turn introduced ourselves around the room.  In all there were about 10-12 people there.....another 10+ will be on board in another week or less.

For the month of May we will be working just 30 hours a week, but by June we'll be moving up to 40 hours per week as the summer season and crowds descend upon South Lake Tahoe.  After the meeting TLE and I drove over to our bank to have some documents notarized, and then we were back to work by 12:30.....well, TLE was.....I had to got to the local USPS to mail the notarized documents, then get a Subway sandwich for lunch before going back to work at 1:30.  TLE and I worked until 4 on this first day.   We'll be working Saturday through Wednesday each week putting in about 6 hours per day.

TLE had me grill some wonderful salmon steaks, and she prepared a rice, cauliflower, broccoli side......great dinner! 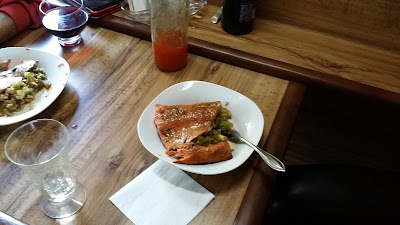