Our intent when we awoke Thursday (our day off) was to head down to Carson City around mid morning, do our shopping, get my ears lowered and then head back to Lake Tahoe, but, to change things up, go north on SR-28 and drive around the lake counterclockwise stopping in Tahoe City at one of our favorite Tahoe Basin restaurants (The Bridge Tender) for lunch, but then the following happened......

There was a lake wind advisory which normally does not concern us as we are pretty well protected here at TVC being surrounded by a forest, however, the wind was coming more from the south/southwest (from the passenger side of our coach where the patio awning is) and was beginning to concern us, so we decided to delay our departure until early afternoon....say around 1 pm when the wind was forecast to begin to abate.  We wanted to be on hand just in case the wind got out of control and we had to stow the patio awning.

As it turned out the wind did abate sufficiently by 1 pm so we began our drive down to Carson City.....normally we take US-50 all the way over Spooner Summit to Carson City....normally takes about 40 minutes.  I say 'normally', because it was not a normal day at Stateline......as we approached Nevada SR-207 (Kingbury Grade road) we saw that traffic was being diverted off US-50 to Nevada SR-207.....apparently there was some sort of bicycle race going on around the lake which involved US-50 and Nevada SR-28 so traffic was being diverted from Noon to 2 pm......uggggh!  Well, okay, we could still get to Carson City, but we would have to take the long way around, so we did.

This alternate route took us through Genoa, the oldest Nevada settlement dating back to 1851, which was a nice drive albeit 30 minutes longer to our destination.  Nevertheless, we enjoyed the drive and arrived at Trader Joe's by 2:20.....from there we headed over to Costco to take on fuel and buy a few things, then over to Supercuts for my haircut.   By the time I was finished with my haircut TLE had found out that Nevada SR-28 was open again, so we headed over Spooner Summit and began our drive counteclockwise around the lake passing through Incline Village, Brockaway, Carnelian Bay, Kings Beach, Crystal Bay arriving in Tahoe City at The Bridgetender, a Tahoe City institution for over 35 years, around 4:30 pm......so, instead of lunch we sat down for an early dinner....works for me! 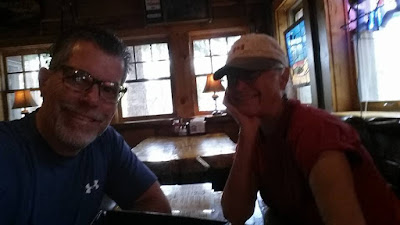 The Bridgetender, for those who have not been following my blog long, is located on the shores of the Truckee River across the street from the dam which controls the outflow from Lake Tahoe into the aforementioned Truckee River.  Yelp gives them a solid 4 stars on 413 reviews.....we are somewhere north of 4 stars, personally.  They have, in my estimation, one of the most amazing Bleu Cheese & Bacon Burgers I have ever had, and that is what I order every single time.  I chased it with a pint of draft Moose Drool.  TLE ordered onion rings which she loves, and I gave her part of my burger.

We were back on the road a little around 5:30 concerned that we might have a long drive home due to the 5, or 6 construction zones we had to go through on California SR-89 to get back home, but, as it turned out we did NOT have to stop one time hitting all the zones just as traffic was beginning to move again.....SCORE!!

We were home before 7 with smiles on our faces settling quickly into the evening.  Friday will be a great example of how fickle the weather in the Tahoe Basin in in May....Thursday we had a high of 70........there is an 70% chance of snow Friday with the high barely reaching 40.....overnight low is projected to be mid 20's.....BRRRR! 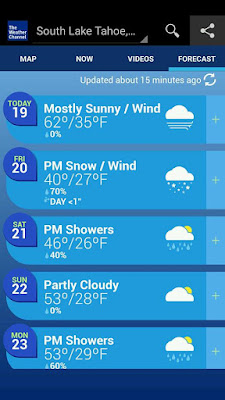 The day did not go as we had planned, but in the end is was the perfect day.....thanks for stopping by!
Posted by Whatsnewell at 9:05 AM