Right after breakfast I headed out to the trailer to tune up our Cannondale Tandem for it's first time out this summer......it's actually been over a year since we took a tandem ride, but Friday we did.....we rode all the way out past Meyers to the end of the bike path (about 5 miles each way) and back to the 'Y' (intersection of US-50 and SR-89).  The weather was perfect.....cloudless skies with temps in the 60's.

As we rode west on US-50 towards Meyers we saw one RV after another headed east to Lake Tahoe.....yep, this is the beginning of the Memorial Day weekend, and it will get quite busy for the first time since we arrived April 30th.  It will provide a good test for our new staff who have been busily preparing for this weekend.  I can already notice my Verizon WiFi slowing down with the influx of vacationers into South Lake Tahoe.

After we made the turn around and began our trek back to SLT we decided we would stop off at a new cafe in SLT called MoonHouse Brewhouse, located near the 'Y'.....TLE had noticed they were finally open.....we saw construction going on last summer, but they did not open before we left just before Labor Day.  What a pleasant surprise....... 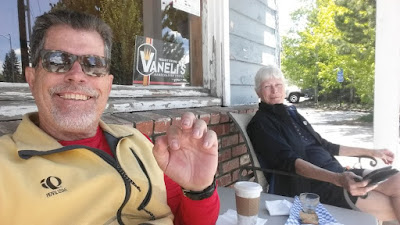 .....they haven't been open long enough to garner many reviews, but so far after 6 reviews, including mine, they are at 5 stars according to Yelp.  Each cup of coffee is brewed right in front of you using a drip machine.....I got a cup and TLE ordered some espresso as well as some sort of berry scone.....we sat on the front porch enjoying the view and talking with other customers.  The locals seem to appreciate this new coffee place and are showing up to support them as they get off the ground...... 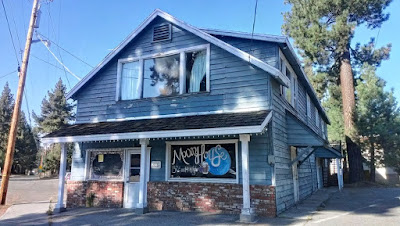 .....we were back to the coach a little after noon to find the campground filling up quickly....we all agreed it is great to see the campers coming back after a long month of hard work and preparation.

I have been wanting to put up some sort of sun shade over the door to the trailer as it gets quite hot on cloudless days with the sun hitting the door for several hours....TLE reminded me we had an old sun screen we rarely use, so I added some male snaps over the door and using the two remaining tent poles I ordered 10 days ago put it up....TLE was a great help! 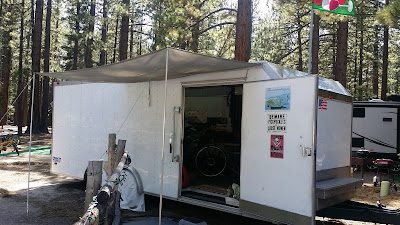 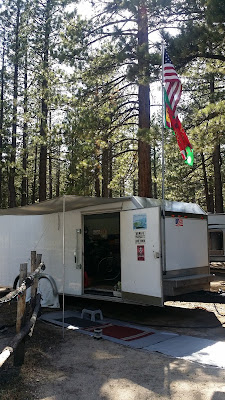 We had cocktail hour at our neighbor's, Gordy and Carol, 5th wheel, and then headed back to the coach to turn on the Sea-B-Que to grill some hot dogs and corn....TLE baked some potatoes, and opened a bottle of Pinot Noir and we at by the fire....yep, the weather is beginning to feel more like spring.....finally!

Posted by Whatsnewell at 7:00 AM