There were no May Day marches and/or parades here in TVC*.....there aren't enough people in TVC right now for a march and/or parade....instead I spent the better part of the day getting "setup" (I always wondered if people do anything for the worst part of the day....probably not by choice, huh?).....hooking up the long sewer line, putting out the awning mat, deploying the patio and window awnings, the three gray tarps we bought at KMART so we can walk back to the trailer without putting on our shoes, putting on all ten wheel covers, deploying the 'malibu' lights, and setting up my work bench in the trailer. 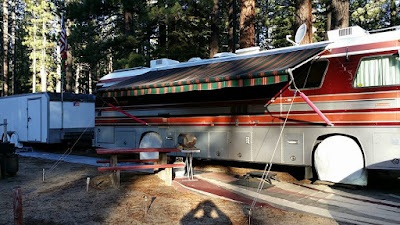 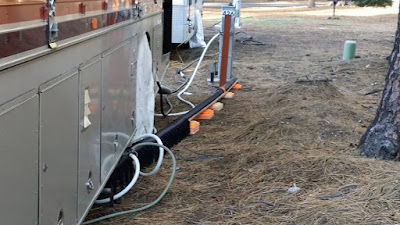 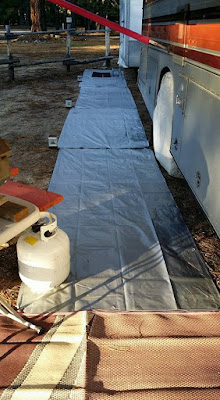 It was in the mid to high 30's until about 10 am so I didn't really venture outside until it got into the 40's, but once outside I worked pretty steadily until about 1 pm in my hoody sweatshirt and sweatpants......finally by 1 it was t-shirt time, but barely!  About that time we got a call from Victor asking if we could come and work in the store from 2 to 5 pm as he had some errands to run......we readily accepted.  Since I still had a few things around our site to do I didn't follow TLE over to the store until 3 pm.

When I arrived just before 3 it was obvious some changes had been made in the registration desk configuration, which we both like.  In no time I was in the golf cart making a run to the 'yard' with a bent cashier's drawer to straighten it out, then re-install.  I was barely back from that errand when I was asked to deliver a portable fire pit to site 209....it felt like I had never left........

......I stopped to talk to a few full time tenants who welcomed me back.....it will be a while before things get real busy, but it was nice to work a few hours with no pressure to kind of ease back into our routine.  TLE, as she is want to do, spent time cleaning and organizing her work area in between phone calls, and customers coming in to ask questions.

The hours passed by quickly, and at 4:30 we began to close up the store, run day end reports, turn off the lights, set the alarm, and then walk home.  It won't be long until the lines at the registration desk are 3 deep, but that can wait.....for now we are just enjoying the general lack of activity, and the emptiness of the campground.

TLE made street tacos for dinner, which meant I had to get out the BBQ to grill the pollo asado.....yeah, I am slowly getting our STUFF out for the summer.  I've got a number of hours of work left, but Sunday was a good first day!

Thanks for stopping by!
Posted by Whatsnewell at 7:19 AM