At dawn the skies over the Tahoe Basin were a steely, sodden, forbidding gray.....I wonder did it stop snowing up there?  If so, when?  What will the Spooner Summit road look like?  Will it be icey?  The forecast Friday night indicated it might snow first thing in the morning, but the updated forecast Saturday morning indicated it was not snowing.  Our plan was to drive the last 31 miles to Tahoe Valley Campground around mid morning hoping to avoid any unfortunate weather and road conditions.  Fellow TVC staff members Phil and Sandy arrived at Silver City late Friday afternoon and left first thing in the morning to take on Spooner Summit....Sandy called me about 45 minutes later to say that the weather was fine, and the road was in excellent condition......whew!

Around 9:30 we unhooked and I drove the coach over to the Silver City propane station where they dispense propane at $3.25/gallon.....not a wonderful price, but certainly much less than the $3.99 they charge at TVC.  Our tank was about 1/2 full which is what I would expect after 3 months.....normally we can get 6 months out of one tank of propane in SoCal.  We took on 22 gallons, paid our tab and were on our way.....we left the VW out of the trailer for the final 31 miles......no point in loading it for such a short distance, right?  TLE followed as I began the ascent. 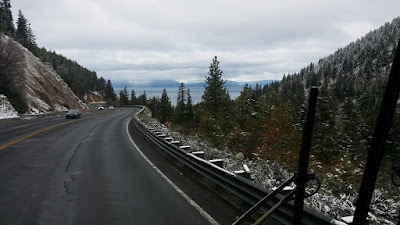 I never tire of this first glimpse of Lake Tahoe

......Lake Tahoe in all her cloud shrouded glory.....beckoning us onward towards our summer sojourn.  We arrived at TVC shortly before 11 am with smiles on our faces.  It was as if we had never been gone even though 8 months has transpired since we rolled our wheels north to Cape Blanco......8 months almost to the day. 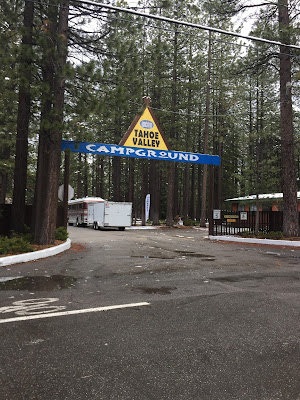 Ironically we arrived at TVC on April 30th marking the end  of our 50th consecutive month of nomadic wanderings.  We were greeted by a winter wonderland.....it had snowed for several hours during the night......a wet, sticky, soggy type of snow......as the temps warmed the snow began to fall off the trees in big chunks.....I know....I was hit by a few as we were checking out our site for the summer......we have spent close to a year out the last two in this exact location.  Instead of backing my rig into the site this year we pulled into it from the back side using the outside loop road....since we are the only ones here the site behind us is not blocked right now making it much easier to get situated this year.

We spent about an hour getting partially set up......it was too wet to put out the awning mat, or hook up the sewer, so I just plugged in and hooked up our water.....I'll take care of the rest Sunday when it is forecast to be sunny.

We made a quick run over to KMART to pick up a few tarps, and some other sundries, and then around 4:30 we walked over to Lake Tahoe Pizza for our traditional 'first night at TVC dinner'.

When we returned to the coach I found the front electric heater was not working....it's only a couple of years old, so I was pretty sure there was nothing wrong with the heater, but, nevertheless, my mind immediately goes to that dark place where I'm imagining having to order a new heater.  I got out my multi meter and began checking for current......no electrical current at the heater, so it's not the heater.....no electrical current at the thermostat control....hmmmm.  I go outside and open the water bay to find that electric heater is also not coming on....then I check the block heater and it is not working either......hmmmm.  Inside the TV is on, and all the outlets in front of the coach are working, but all the outlets towards the rear of the coach are not.  I finally deduce that one of the 50 amp legs on the electrical pedestal is not working, and sure enough that is the problem.....whew....at least there is nothing wrong with the coach.  I checked the 30 and 20 amp outlets in the pedestal and they were not working either, so it looks like a job for the electrician.  Meanwhile, back at the ranch, I needed power, so using my existing 50 amp extension cord and the BRAND NEW one I recently bought (you just never know do you ?) I was able to run my line to the pedestal in the site behind us and plug into that 50 amp outlet.

After buttoning everything up again, and putting away all my tools I sat down to relax for the evening......our first day at TVC is in the books.  We'll spend Sunday getting set up in the sun, but beginning Monday we will have a week straight of forecast rain.....I have never hoped more that the weather guessers will be wrong this week.

Posted by Whatsnewell at 7:41 AM