One of the things I like about my job here at TVC is that no two days are exactly alike.  Every day presents different challenges, new projects, and an occasional surprise.  After completing my morning rounds I spent time at sites 294 and 336 which happen to back up to each other.  I wrote about placing logs at these sites a week, or so ago to better define the boundaries of the two sites.  Unfortunately unless these logs are secured to the ground they will inevitably be moved by humans, so Wednesday I went back to pound some 'L' shaped rebar into the ground to be sure they are not moved to increase the size of one site, or another. 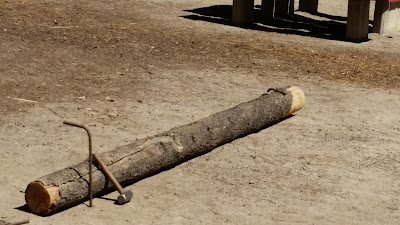 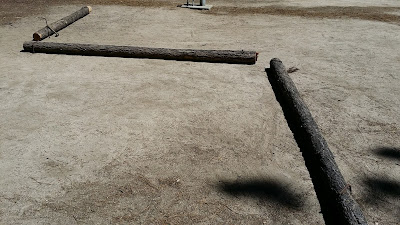 The boundaries are now secure

We're in that sweet spot between the 4th of July blowout weekend and the arrival of the church groups at the end of July.  The park is about 75-80% full, but running smoothly.  There is that fine line between our current capacity and 100% where things go from running smoothly to seeming organized chaos.  When the church groups arrive (one after the other) we will go to close to 100% again and we will be juggling a lot of balls in the air for about 3 weeks.

While I was making my afternoon rounds I came across this 1984 Newell Classic in site 255.....what a cool surprise....not many Newells come into TVC.  I met the owners and invited them over to see our 1982 after we got off work.  Eric purchased this Newell about 4 years ago after seeing it here at TVC.  He approached the owner about buying it, and it just happened the current owner at that time was thinking about selling.  It had a different paint scheme back then.....Eric had it completely repainted.....around 6 pm Eric and his daughter came by for the tour.  We'll visit their coach Thursday after work..... 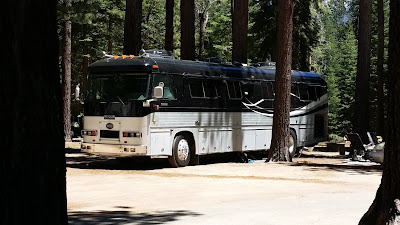 I 'clocked out' around 3 pm as I was an hour over my 40 hours for the week coming into Wednesday......TLE followed an hour later.  She headed off immediately to Raley's to do some shopping and came home with a large ahi tuna steak for me to grill.  She added cooked spinach and barley sides.....we ate outside once again......the early evening weather is just perfect right now!

Thanks for stopping by!
Posted by Whatsnewell at 6:38 AM