When I clocked out Saturday afternoon the 'Overflow Area' was in good order.  We had sold about 20 sites, and all the cars were parked out front as they should be.  When I returned shortly after 5 am Sunday morning it was total chaos.  All the parking spots in front were filled, but there were an equal number of vehicles parked in the 'Overflow Area' next to 15-20 more tents.  We had never sold more than 20-25 of these sites in the prior two years.  I counted close to 40 sites occupied.  So much for design......lol.  Even though my parking design did not anticipate that many vehicles it worked out in the end.  Many of the additional tenters were just there for one night, and by Sunday afternoon things had settled down and there was enough parking once again.

We had a few minor noise issues, but they were dealt with quickly and we had our second 'quiet' night.....of course when you have over 400 sites occupied, and some 3-4,000 people in such a small geographical area it is never really 'quiet', but generally our customers reported it has been much better this year than in past years.

After turning in my cart and clocking out just after 7 am I headed back to our site to do a little 4th of July decorating...... 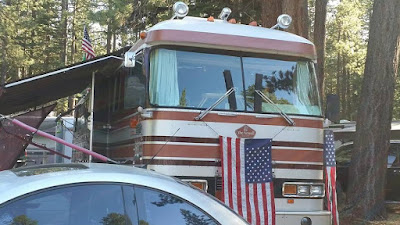 .....I then visited one of our customers, Elizabeth, whose wind damaged awning I wrote about a couple of weeks ago.  Several of us had noticed her awning had been slightly damaged by the wind one day while she was gone and stowed it to prevent further damage.  Elizabeth is 93 years old and has been coming to TVC for many years in her small Class A motorhome.  I agreed to try and locate the broken awning piece and help her fix it.  Well, after a week, or so I was able to find the replacement piece on eBay for about $110.  She agreed to the price and I ordered it.  Everything arrived last Wednesday, and Sunday was the day to install it.  It took about 20 minutes to install the replacement piece and once again Elizabeth has shade when she needs it.

My daughter, Meredith, and her friend Amy decided to drive up to visit us for 4 days leaving Claremont, CA around 10:30 am for the 400 mile drive.  They arrived just after 7 pm.  On the drive up Meredith sent a text wondering if we could find a bicycle for Amy to ride while they are here for four days and I replied that I could...... 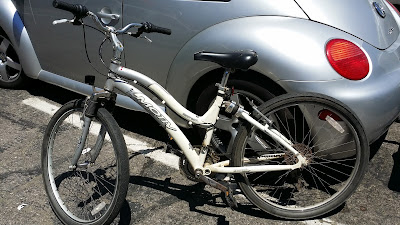 ......after TLE returned from grocery shopping I drove the car over to Tahoe Market Thrift Store to see what bikes they had in stock.  They always have 4, or 5 bicycles for sale, and they are usually in good operating condition.  If you purchase a bike from them for full price ($60 in this case) and return it within 2 weeks they will by it back from you for one half of what you paid.  That is cheaper than we could rent a bike so I bought this girl's Motiv (pronounced Moteev) comfort bike for Amy to ride while they are here.

Needless to say, I spent a good portion of the afternoon 'detailing' the bicycle to get it ready for the arrival of Meredith and Amy (Meredith brought her own bike....the Dahon folding bicycle I bought her for Christmas.

At any rate, as I said, they arrived without incident a little after 7 pm, and we got them tucked into their cabin for the next four days, then ventured over to site 424 where we had been invited by some customers to enjoy some Mongolian BBQ.  We were treated like visiting royalty and had a wonderful time getting to know their large family.  This is pretty typical every year.....we often get invited for a meals by customers who want to express they gratefulness for helping them in some way.

After dinner we sat around the fire talking and laughing as always.....before we knew it the time had flown by and it was approaching 11 pm.....ugggghhh.....I have to get up and patrol at 5 am. And so I sit here at my keyboard once again around 4:30 am getting ready for my 2 hour tour of duty.......I need a nap!

I'm happy to report that we have had another quiet evening......thanks for stopping by!
Posted by Whatsnewell at 4:38 AM