One of the things I have missed since we arrived is riding my bicycle on a regular basis.  Last year I was off most days by 2 pm, and still had the energy to take a good ride most days.  I was out on my bike just before 10 am intending to ride up to the Emerald Bay Vista Point, and I got within 1.5 miles of the summit when I began to notice traffic had stopped.  I assumed it was a construction delay, but after about a mile I got to the front of the line to find that a semi tractor trailer had 'high centered' on one of the numerous switchbacks.  The CHP officer I talked with advised traffic had been stopped about an hour, but it appeared they had dislodged the truck and it would be on its way shortly.  Well 'shortly' evolved into 15 minutes so I opted to turn around and begin my ride back down the hill...... 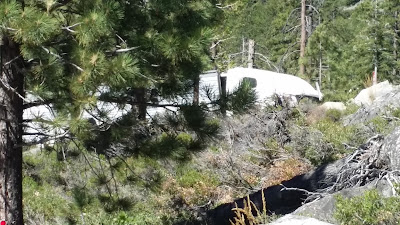 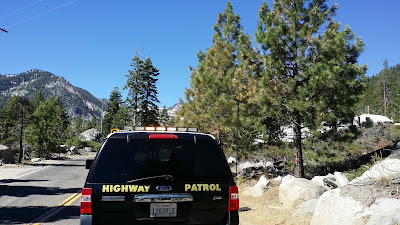 .....as I approached Camp Richardson I decided to take the Fallen Leaf Lake spur of the bike path and add a few miles and some good climbing to my ride.  By the time I arrived back home it was around 11:30 am and I had covered close to 19 miles.

I drove the car over to DIY to pick up some new fluorescent light tubes to the ones in the trailer that have begun to fail.  I was back by 12:30 and spent about 30 minutes puttering around in the trailer before heading inside to take a nap, then a shower before our shift began at 3:30 pm.

We arrived for our shift around 3:20 pm.  Already I could feel a different vibe in the air.  Things seemed more laid back.....relaxed, if you will.  We were just past the heat of the day and I could already feel the temperature dropping as I got in my golf cart to keep my eye on the entrance.   We still had some 60 arrivals expected so I was sure things would get busy soon, which they did.

It took me an hour or two to adjust to my new roll.  Instead of doing site checks, which were done in the morning I followed up on some minor issues left over from the day shift.....a tent camper had pitched his tents on the wrong site of his site post (352) and was mostly in the site of his neighbors.  There was one gentleman in site 251 which could not put his 5th wheel out of the site as his neighbor's car across the street was in the way (the car was legally parked).  The tenter eventually returned from site seeing about 6:30 pm and moved his tents.  The guy in 251 was finally able to leave his site around 4:30 pm so the guy in site 150 could move into that site.  The rest of the evening revolved around me learning how to test the chlorine and PH levels in our swimming pool, filling propane bottles until dusk, unclogging three clogged toilets in various restrooms, wet mopping out the store and ice cream shop after 10 pm, making sure all the restrooms had plenty of paper towels and TP, taking out the trash, and driving around the campground to be sure everyone was observing the quiet hour which began at 10 pm.  There were only 4, or 5 sites where there was excess noise and they quickly quieted down after I stopped and reminded them about quiet time.  Most people kind of lose track of the time and are apologetic,and that was the case Friday evening.

TLE and I made one final round around midnight through all 4 restrooms to be sure the paper products were topped off before punching the clock around 12:19 am.  We spent about an hour relaxing and unwinding from our first night shift.  I did not arrive home feeling spent, or tired like I have on the day shift......we both thoroughly enjoyed our first night on the job and are looking forward to continuing on with our new schedule.