It has been 9 months since our 1982 Newell has been outside the boundaries of RORVR.  During all that time I have only rolled her wheels twice.  Once to drive 1/4 mile down to the propane station back in August, and then back to our temporary site where we resided until site #72 had been properly leveled.  When we moved back to site #72 in mid October I thought she would not move gain until the end of March, 2020....a full 11 months after she first entered the friendly confines of RORVR.  I thought I would not be thinking about rolling her wheels until then, and that it was just a matter of playing out the string and then beginning to pack up in mid to late March.  Now, in just a matter of a few days duration all that has changed and I am in full pack up mode.   My mind races on endlessly without rest thinking about all the things which must be done before we roll our wheels the morning of January 25th.

To begin the packing up adventure I retrieved the Kubota front loader, drove up to the storage area to hook up our 2007 American trailer, and tow it down to site #73 where it will sit for less than a week while I organize the interior in advance of Beetle insertion Saturday morning.  When I moved our trailer last weekend it was the first time its wheels had rolled in almost 9 months, and I was sure it would not move again until late March. 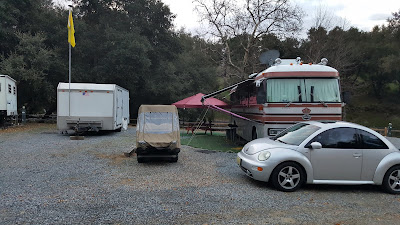 My 'garage' is back where it belongs

While all this was going on the first NFL Championship game between the Tennessee Titans vs. the Kansas City Chiefs was in progress, so once again, for the first time in almost 9 months I hooked up the wireless TV signal transmitters and turned on the trailer TV so I could watch the game while I worked.  When the trailer was up in the storage area it was way outside the limited range of the transmitter, but now it is less than 20 feet.

About mid afternoon, during the second NFL Championship game between the Green Bay Packers and San Francisco 49ers, TLE and I began to take down our lido deck.....we pulled down our sun screens, folded up the table the Sea-B-Que sits upon, put away the Sea-B-Que, and BBQ paraphernalia, and put away the chairs and propane fire pit.  Our little 'lido deck' paradise is now open to the elements, and no longer private........ 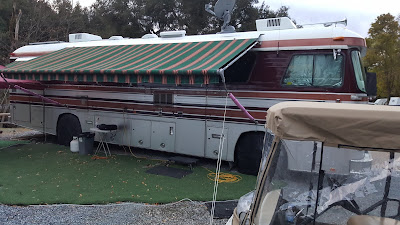 ......while the Titans vs. Chiefs game was close in the first half, the Chiefs took over the game in the second half and won going away.  The second game between the Packers and 49ers was never close, and the 49ers won easily 37-20.

So, my first day of putting things away, and organizing the trailer is in the books, and my mind continues to race along.  Once we begin our journey in the Newell this coming Saturday down Highway 78 to I-15 northbound my mind will slow down, and I will once again turn to TLE and say "It's good to be moving again...." to which she will retort....."Yeah...".


When you shop Amazon, please use our link (below) to access their website.......we will appreciate every purchase you make using our Amazon Affiliate link, and  remember, using our link will not add one penny to your purchase, plus we will receive a small commission which over the course of a year adds up to enough to by a tank of diesel for which we thank you very much!
Posted by Whatsnewell at 7:12 AM