Since late November I have been waiting on the CONEX rental company to come pick up the CONEX storage unit up in the storage area so I could move my trailer to that spot, and be able to plug it in when I'm up there working on something.  For some reason, the rental company has never shown up to haul their CONEX unit away.  As recently as last week they said they would be here that Wednesday, but they never appeared.   On Sunday Dave dropped by the Newell to let me know that the tear drop trailer parked next to the CONEX had been picked up by the owners, and they would probably not be bringing it back, and did I want to move my trailer into that spot, which is directly in front of the electrical outlet.....I, of course, replied "YES!".  So about mid morning Monday I retrieved the Kubota front loader, and using the hitch attachment Rich bought for just this purpose, moved the trailer with TLE's help.....it is now plugged in for the first time since April 28 of last year...... 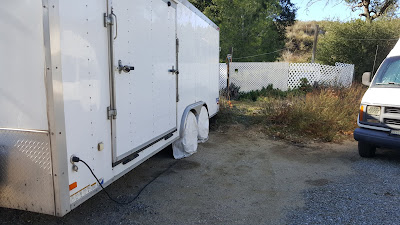 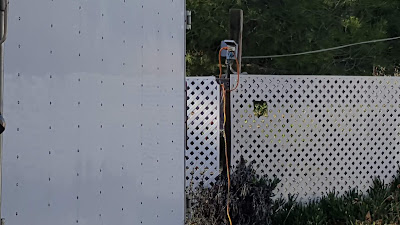 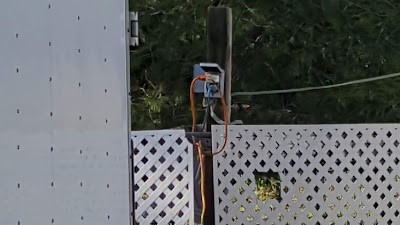 .....I mentioned in yesterday's post that I was going to check to see if after the work I did cleaning up the negative terminal post in the high voltage fuse box the alternator was now charging the battery when the engine was running.  Instead of using my code reader's live data feature I simply used my multi meter to check the battery with the engine off, and then on, and the verdict is in......the battery is now receiving a proper charge of 14.4 volts....when the engine is off the battery sits at 12.5 volts....not perfect, but very good.  The main thing is the alternator charge is reaching the battery now.  Of course this was only a temporary fix as the new high voltage fuse box will be arriving in a few days.

Once all that was done I retrieved my Haibike and headed up the hill to work on the single track trail again.  I took pictures this time of the work I had done a few days ago..... 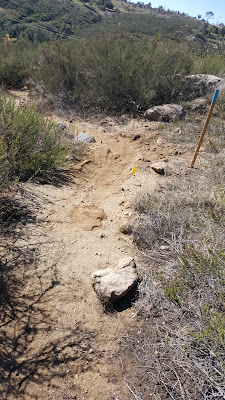 ......there is this one very technical stretch about 100 yards into the trail that has several tight turns, almost all off camber, and up to a few days ago, a lot of big rocks, as well as blind corners.   This stretch is about 40-50 yards long, but before the work it was almost impossible to clear it without stalling out at some point.  My goal was to trim the brush back on the blind corners so one could see what was coming, and set up properly to clear the next section.  I put banks in the turns to remove the off camber nature of the them, then moved a few large rocks.... 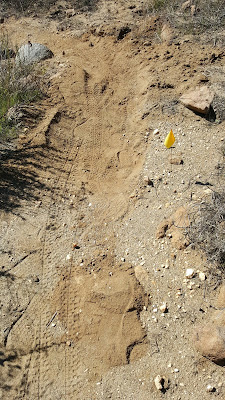 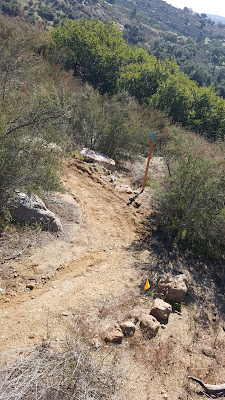 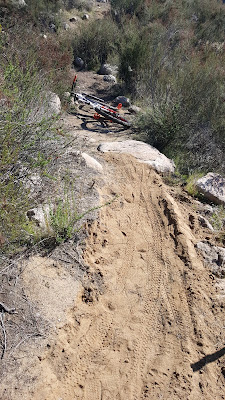 ......further on down the trail (about 300 yards) I straightened out a couple of turns, moved a few more rocks, and clipped some more brush back.  My intent had been to return to the top of the trail to ride it with the improvements, but after a couple of hours of trail blazing work I was out of energy, so left that for another day and headed back to the Newell to clean up and take a nap before the NCAA Championship game between the Clemson Tigers and LSU Tigers came on at 5 pm, knowing full well that the name of the winning team would be the Tigers.....:-)

The game was all that it was billed to be.  It began with Clemson dominating LSU in the first 20 minutes up 17-7, but then the game turned, and suddenly LSU was up 28-17 by half time.  It got as close as 28-25 in the 3rd quarter, but LSU pulled away winning easily 42-25, and it wasn't really that close.

TLE delivered big time on dinner......she doesn't do this dish a lot as there is a lot of preparation, but on this day she made her special Chicken Marsala...... 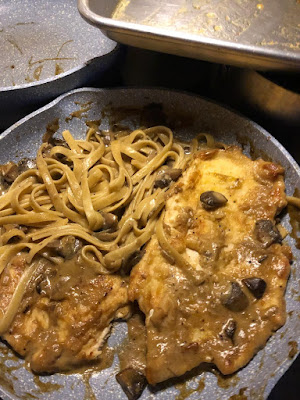 ......OMG, it was her best effort to date.....right up there with restaurant quality!

The NCAA Championship game was not over until well after 9 pm, meaning it was over 4 hours long, but we enjoyed every single minute of it.  Within minutes of the end of the game I was in bed slipping off to dreamland once again.

When you shop Amazon, please use our link (below) to access their website.......we will appreciate every purchase you make using our Amazon Affiliate link, and  remember, using our link will not add one penny to your purchase, plus we will receive a small commission which over the course of a year adds up to enough to by a tank of diesel for which we thank you very much!
Posted by Whatsnewell at 7:36 AM