Making a mountain out of a molehill......

Thursday morning began under 30° F, but by 10 am I had my UnderArmor shirt, and hoody sweatshirt off.  Right now in mid January it stays warm for about 4 hours (10 am to 2 pm), and that was our window to begin gluing down the new artificial turf on hole #9...... 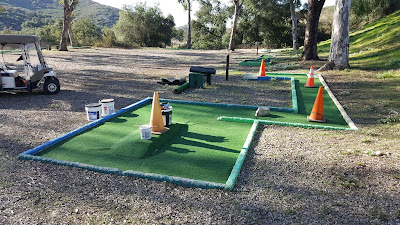 ......we began with the center piece of this hole.....the mound, aka: 'Mt.' Lorenzo......not really a 'mountain'.....more like a molehill.  Everything on this hole revolves around the mound where the hole is located.  That piece must be glued in place before the rest of the turf around it can be glued.  While TLE placed globs of the adhesive on the cement, I used a serrated edge trowel to spread it out thinly...... 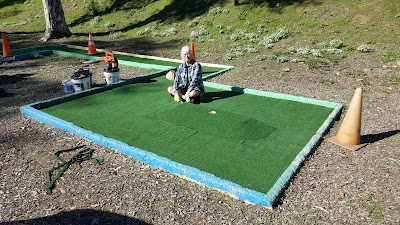 .....once the mound piece was in place we took celebratory pictures...... 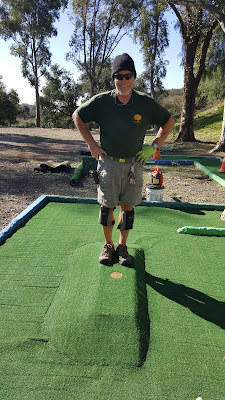 ......but that was the easy part.  We did not want to remove the large piece of turf surrounding the mound to cover all the cement surface with adhesive at one time as it would be difficult to get the entire piece in place before the adhesive began to set, so we folded over one section at at time, applied the adhesive to that small section, and then moved to the next. 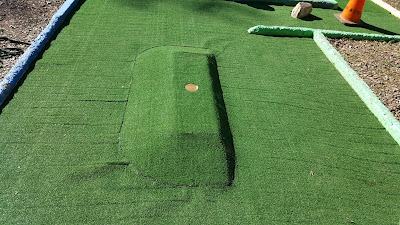 Only the mound piece is glued down at this point, and the hole has once again been exposed to the light of day

By 2 pm we had glued the entire piece around the hole, as well as the piece beginning at the boulder (see above picture) and ending at the corner where the cone is.  TLE is off at 2 pm so that was a good ending spot, plus it began to cool off quickly at 2 pm.  I ferried TLE home, and then returned to clean up the tools we used, and then haul two empty 5 gallon adhesive cans along with the rest of the old artificial turf to the dumpster.  It took a while to clean the adhesive off the trowels as it had begun to set by that time.

There are still three more pieces of turf to glue, but they will have to wait until Saturday at the earliest as it rained this morning (early Friday morning), and it will not be dry enough, or warm enough to apply the adhesive until then.  Once again, spending most of the day on my hands and knees had a deleterious effect on my knees, and the rest of my body.

TLE had a 3:15 pm chiropractor appointment, and successfully drove the VW into town and back without incident, so my temporary fix to the high voltage fuse box seems to be holding.  In the interim the new box has arrived, and I will install it on Friday afternoon.


When you shop Amazon, please use our link (below) to access their website.......we will appreciate every purchase you make using our Amazon Affiliate link, and  remember, using our link will not add one penny to your purchase, plus we will receive a small commission which over the course of a year adds up to enough to by a tank of diesel for which we thank you very much!
Posted by Whatsnewell at 7:28 AM