On Friday when we were down in Poway at COSCTO picking up my prescriptions we decided to fuel up the VW at their fuel station where premium sells for $3.49/gallon....about as good as it gets in SoCal.  As we were waiting in line two dash lights came on....ABS, and anti slip.  Within seconds the little red battery symbol appeared, then the airbag light, and then the parking brake light....suddenly the car began to idle roughly......just as we pulled even with the pump the car died........hmmmm?  While TLE pumped the gas I opened the hood to see if I could see anything obvious was wrong.....nothing obvious, of course.

Okay, a little background at this point is necessary......this same thing had happened a couple of months ago as we were driving through downtown Ramona.  I pulled over then, even though the car still seemed to be running fine, turned it off hoping that would reset things, but then it would not restart...it would not even turn over....not even that dreaded 'clicking' sound the starter makes when the battery has died.  Since the engine would not even turn over, just as Friday, I thought the battery had died.  We were about half a block from the local Napa auto parts place so I began to attempt to remove the battery, but realized I did not appear to have the right metric socket (#10)......the Napa store was about to close in 10 minutes so I just reattached the positive cable to the battery thinking I might have to call a tow truck.  When I got back in the car the dash lights had disappeared, and the car started immediately.  I wrote it off to a 'gremlin' in the electrical system, and drove home.

Fast forward back to Friday at COSCTO.....I figured if I disconnected the positive cable from the battery for a few minutes and then reconnected it the same thing would happen.......NOT.  So TLE has finished pumping the gas and there is a long line of vehicles behind us.....I suggested we push the Beetle off to the side, and figure out what to do next. Just as we get the car out of the way the next gentleman in line who was in a Toyota PU asked if I had jumper cables, to which I replied "YES!"......he pulled up next to me as I retrieved the cables.  We both quickly connected them, and then I attempted to start the car.....it started, and all the lights disappeared once again.  We thanked him and drove home without incident.  I'm thinking all the way home "What on earth is wrong with the car?".   We get home, and I turn the car off, then turn it back on.......perfect, or so I thought.

Fast forward to Sunday.  We needed to do a 'big' shopping so we headed down to the Stater Brothers in Ramona about 10 am.  Because I was still uncertain what was going on with the car I decided to head to AutoZone first and buy one of those portable jump start battery packs just in case something unfortunate happens again before I figure out what is wrong.  AutoZone sells one made by Duralast (an AutoZone brand) that provides a 1,000 watt (100 amp) jump start, and also provides a high pressure air pump.....cool.  I bought it, and then we headed back to Staters......all this time the VW is operating normally.....no dash lights....no nothing.....just purrrring like a kitten.

We park in front of the Goodwill, both finding something without which we could not live, and then head over to Staters to do our 'big' shopping.  By 11:30 am we were driving home through downtown Ramona when those darn ABS/anti slip lights come on again.....having learned our lesson when this happened the first time a couple of months ago, we did not stop, or turn off the VW.....we just headed straight home.   Within a couple blocks the battery light came on again, then the airbag light, and then the brake light......just as we were passing under the security gate at RORVR the car began that rough idle thing it did at COSTCO so I knew we were on borrowed time......just as we came to a stop in front of the Newell the car died.....well, that certainly was fortuitous.....:-)

We carried our purchases inside, and then I plugged in the new Duralast jump start pack to get it charged.  By this time I was zeroing in on the alternator being the issue......the battery is obviously discharging while driving which means it is not getting charged by the alternator.  I decided to sit down and look at some videos on Youtube about this issue.  One video suggests checking the fusible links in the high voltage fuse box which sits atop the battery case.  If any of those fuses had blown that could be causing the issue.  So, armed with this new information I did just that, and guess what I found...... 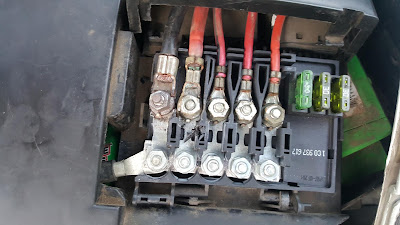 .....it's hard to see now, but the black negative cable on the left was showing severe oxidation, and the nut which affixes it to the post was totally rusted out, and the plastic to the left was completely melted...... 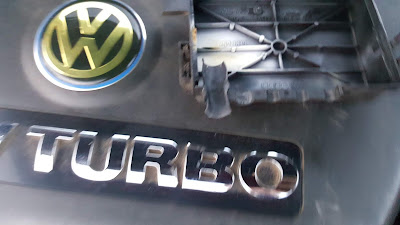 ....on the high voltage fuse box lid (above) you can see burn marks, and residue from the extreme heat produced at that terminal.  Suddenly a light goes on in my head....if the negative connection is compromised, as it obviously was, the charge being sent by the alternator to the battery is not getting there consistently due to the increased resistance at that negative cable connection.....doh!  Well, like I have said previously, start with the simple stuff first......the cost is about the same to replace the alternator (much harder to get at), or the high voltage fuse box (much easier to access and replace), so I quickly ordered a brand new version of the later, which will arrive later in the week.....problem solved.....I hope....fingers crossed!

In the interim I disconnected the negative cable from the box, cleaned it, the bolt, nut, and fusible link free of the corrosion, and reinstalled them, then attached my batter charger to recharge the battery.  Prior to discovering and cleaning that one negative terminal I had attached the charger, but the battery would not charge.  Once it was cleaned, the battery began to charge, and this morning (Monday) it is now fully charged once again....... 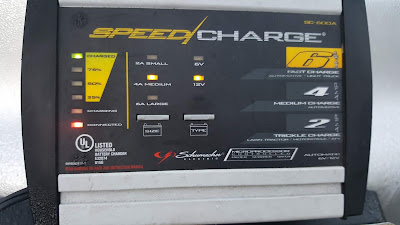 The green charged light is now glowing brightly this morning

........this morning (Monday) I will attach my Foxwell code reader, which provides 'live' statistics while the car is running so I can see if the battery is charging, or discharging.

So, what else happened Sunday?  Well, besides the Beetle shenanigans, not much.....there were two NFL divisional playoff games being played Sunday featuring the Houston Texans vs. the Kansas City Chiefs in the early game, and the Seattle Seahawks vs. the Green Bay Packers.  The first game began much like the Saturday game between the Titans and Ravens, with the underdog getting out to a big early lead (24-0 at one point), but then the Chiefs suddenly turned things around and outscored the hapless Texans 51-7 to win going away 51-31....WOW!  The nightcap was the only close game of the weekend with the Packers hanging on to win 28-23....a game much more to my liking.

TLE had me grill shrimp again for dinner to which she added a salad, and some more Malbec to chase same.  The shrimp turned out very well once again!

When you shop Amazon, please use our link (below) to access their website.......we will appreciate every purchase you make using our Amazon Affiliate link, and  remember, using our link will not add one penny to your purchase, plus we will receive a small commission which over the course of a year adds up to enough to by a tank of diesel for which we thank you very much!
Posted by Whatsnewell at 8:13 AM