Short Friday was shorter than normal, but I'll address that later.  I began my day, as pretty much I always do opening things, and checking on the pool.  About 3, or 4 months ago we ordered and received a new thermal cover for our Jacuzzi.  It was purported to be 'heavy duty', but in word only.  It never really fit the Jacuzzi correctly, it was anything but heavy duty, and about a week ago it tore..... 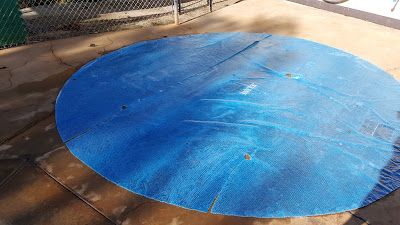 .....in the picture above you can see the left third has torn away (taken after I removed it from the Jacuzzi for the final time).....it was very flimsy.  Rich ordered a new 'heavier duty' one a few days ago, and it arrived Wednesday, or Thursday.  Neither Dave, nor I chose to install it at that time as we thought Rich wanted the 'honor', but at our Friday morning meeting he told me to go ahead and install it.  After doing the pool, and Jacuzzi tests I set about to get it ready for installation.  I first laid out the old one on the concrete next to the Jacuzzi, and then laid the new one over it.  The new one was slightly larger in diameter, but that is a good thing....the old one was about 4" too narrow diameter wise, and left a lot of open water around the perimeter.  The point of this thermal cover is to keep the heat in the water from escaping quite as quickly, which is an issue in winter time.  At the end of the Jacuzzi where the steps are there are also two hand rails.  In order to fit the new cover precisely I needed to measure the distance between the handrails (35"), and then make two cuts about 29" long so the cover could sip around the hand rails and lay flat on the water.... 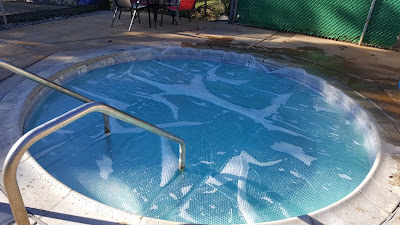 ......my calculations were correct and it fit perfectly.  Of course, since this cover has a larger diameter you can see where it over laps against the tile, and coping on the far side from the steps.  My next task was to cut out that overlap so the entire cover would lay flat against the water....... 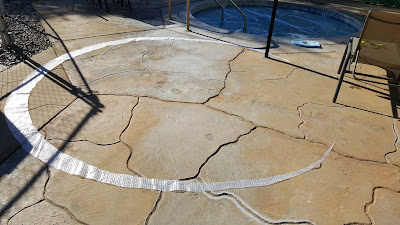 .....while the cover was still in the Jacuzzi I used some hand sheers to cut out the overlap free handed.....above⤴ is what I cut off, and you can see the final result below↴....... 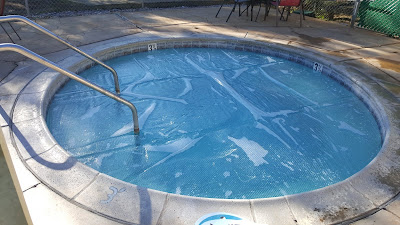 ......frankly, the end result turned out way better than I expected....there is now no exposed water whatsoever, and this cover is definitely 'HEAVY DUTY'!

Rich gave me a list of a few other things needing to be done: 1) Install a new plug in the kitchen sink in cabin #98 to cover the hole where a hand sprayer hose would normally be....there is none on this sink, so we needed to cover the hole, 2) secure the WiFi cable, and TV cable securely to the side of the same cabin, and also cabin #34 using cable clips, and 3) Install a coat hanger rack in Restroom #2 like the one we have in #1.  I checked out the one in Restroom #1 to see how it was constructed, and determined that I needed two 3/4" pipe flanges, which do not have in stock, so I sent a text to Rich asking him to order them.... 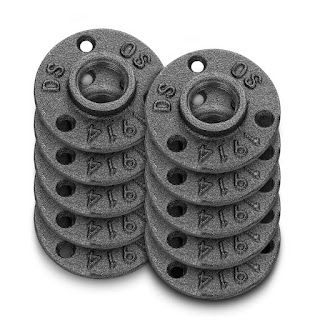 .....by the time I finished with that it was 11:15 am, and knowing Rich and Marnie were hosting lunch Friday consisting of hamburgers I headed back to the office to see  when they wanted the hamburgers cooked, since I was doing the grilling......and that is why Friday was little shorter than usual.  Rich had already turned on the BBQ for me, so I headed home to change clothes (I had a doctor appointment down on Poway at 2 pm, so needed to be ready to leave right after lunch). I returned by 11:45 am and began grilling 12 burger patties for lunch.  They were all done by 12 pm, just about the time everyone began to arrive for lunch.....perfect!

We were done with lunch pretty quickly....we're all used to 30 minute lunches you know, so TLE and I helped clean up, and then jumped in the VW about 12:35 pm to head down to Poway for my dermatologist appointment.

It's funny, you know.......two years ago I had a primary care physician whom I rarely saw.....maybe once every 2 years.  Now, since my stroke, high blood pressure diagnosis, the operation to remove the cyst from my right cheek, heart attack, and melanoma scare I now have an ENT doctor (ear, nose and throat), a neurologist, a cardiologist, and a dermatologist, and it seem like I am visiting one of them every 10 days, or so......at least it feels that way.

Anyway, back to the story......a few weeks ago when I had my 6 month check up with my dermatologist he found a mole on my back that seemed to be growing so he took a biopsy and sent it to the lab for testing.  He had his assistant call me a few days later advising, while it was probably not cancerous, it would be best to shave (good),  not incise (not good), the rest of it off.....I always know when he has his assistant call it's nothing serious......when I had my melanoma diagnosis back in June the doctor called.  At any rate since we left so early we arrived about 45 minutes early, but no  problem.  They checked me, and within minutes I was called back to the smaller room, and within a few minutes Dr. Jou was there.  He shaved off the rest of the mole, and I was out the door by 1:45 pm!  Perfect, again!  We next headed to COSTCO to retrieve another 30 days of medications, fueled up the VW and where home by 3 pm.

We haven't had a fire in literally a few months so I suggested to TLE that we have one....she agreed, but insisted we have the fire lit by 4 pm, as it gets too cold after 5 to be outside, even with a small gas fire. I agreed, and drove up to the trailer to retrieve two chairs, set up the fire pit, and had it lit by 4 pm.  I got out a cigar to smoke, and TLE provided a couple fingers of Scotch.  We sat out side by the fire talking until about 5 pm.....it was like someone turned off a switch!  The cold suddenly began to overcome the heat of the gas fire, and it was time to adjourn inside for the evening.

And now we begin our 3.5 day weekend......no, that is not a typo.....we are trading work days with Dave and Joe as they have something to do next Saturday, so they are working Monday for us, and we will work their Saturday schedule next weekend.

When you shop Amazon, please use our link (below) to access their website.......we will appreciate every purchase you make using our Amazon Affiliate link, and  remember, using our link will not add one penny to your purchase, plus we will receive a small commission which over the course of a year adds up to enough to by a tank of diesel for which we thank you very much!
Posted by Whatsnewell at 9:12 AM