We returned to work Tuesday after our 3.5 day weekend, but it felt like a Monday to us.  Waiting for me in the tool shed was the new clothes hangar rack Rich put together for me.  The pipe flanges I wrote about came in over the weekend so he went ahead and put it together so all that remained was for me to install it in Restroom #2, so after doing my opening duties, including the pool, I retrieved some screws, a ladder, plus the rack, and headed directly to the restroom to install it.  I located a place to install it near the folding table, and had it up within 10 minutes.....easy peezy! 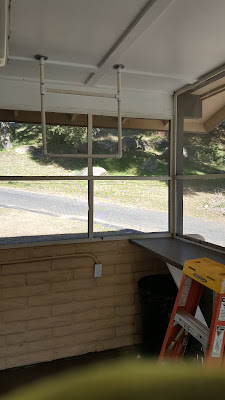 And finally we come to the task for which I have been waiting, and planning since I arrived.....install new turf on Hole #9 at the Mini Golf course, aka: Mt. Lorenzo...... 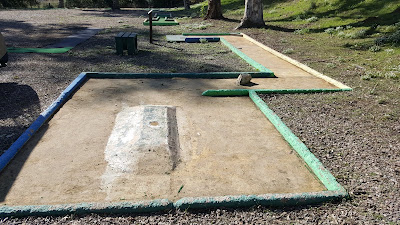 It took less than an hour to remove the old turf

.....the first task was to remove the old turf, which consisted of green, gray and black turf.  The green turf was the oldest, and in the poorest shape.  There has been no turf covering the mound in the center of the above picture for a long time, which can be observed below...... 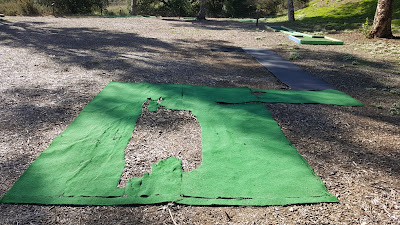 The big hole in the green turf is where Mt. Lorenzo is

......once the turf was removed the real work began.  Using both a pole scraper, and a handheld scraper I spent the rest of the day cleaning the cement surface of all the old turf and glue residue in preparation for the installation of the new turf..... 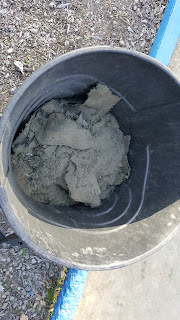 By the time I was finished Tuesday this barrel was half full, and that does not even include the turf, which will be used as a template to cut out the new turf pieces 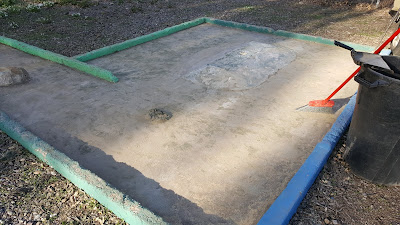 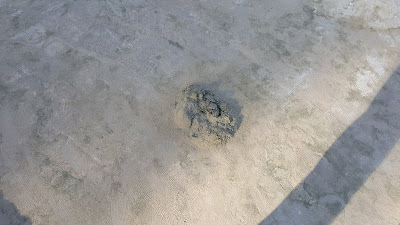 A pile of the turf/glue residue

.......by 3:30 pm I had about 90% of the scraping done, and were my knees and shoulders ever sore.  In the end it was worth it as things are looking pretty good now.  I'll have a little scraping to finish Wednesday morning, and then it will be time to cut out the new turf pieces and install them.... 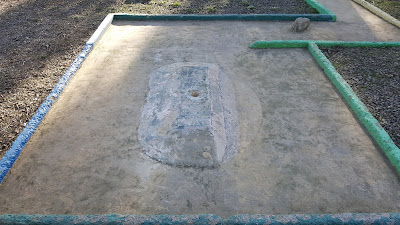 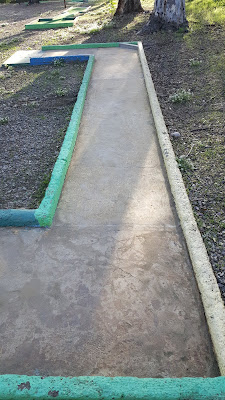 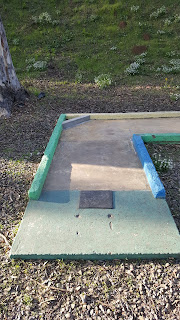 ......to finish up my day I headed to the storage area to dump the trash can full of turf/glue residue, checked the water tank, turned on the pumps for 3 hours, and then put away my tools for the day.  It appears Wednesday will be the warmest day of the week, which is just perfect for the final task of installing the new turf.

I returned to the office at 5 pm to pick up TLE in the VW and drive her to her Chiropractor appointment....she didn't want to drive herself until she is sure the VW electrical issue has been fixed, and I don't blame her.  The VW performed as it should going and coming with no dash lights appearing.....we were home by 5:30 pm without event.


When you shop Amazon, please use our link (below) to access their website.......we will appreciate every purchase you make using our Amazon Affiliate link, and  remember, using our link will not add one penny to your purchase, plus we will receive a small commission which over the course of a year adds up to enough to by a tank of diesel for which we thank you very much!
Posted by Whatsnewell at 7:32 AM