There is a darkside to campground operation, and it becomes easier to understand why many RV parks do not allow tenters as a policy.  98% of tenters clean up after themselves and leave their campsite almost as good as they found it....that's no problem...we expect to do a little cleanup. It's the 2% that ruin it for everyone else.....and the 2% were representing with gusto Sunday as we began to deal with the aftermath of the long holiday weekend. 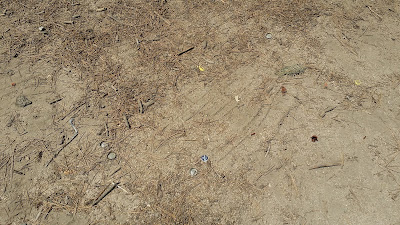 How many bottle caps can you count? 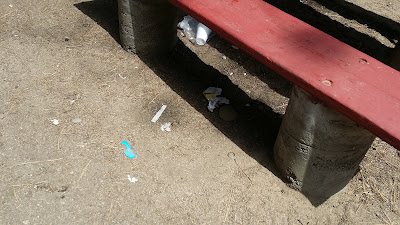 There is no way to take a picture that fully embraces the amount of garbage left behind. 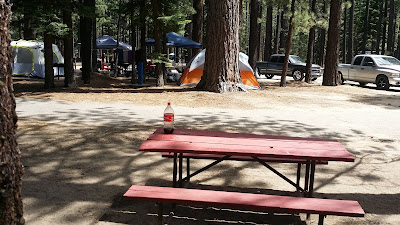 In all we had just under 200 departures Sunday, partially offset by the 55 arrivals.  The relief we all felt as the campground emptied out was palpable, and then, of course, dealing with the aftermath of those who show no respect for your facility by using their site as a garbage pale....I'm talking about dumping unused food in the back of your campsite....watermelon rinds, green beans, cheese, spaghetti, avocados, fruit, cooked ribs, chicken left on the grills, etc.....disgusting!  Bottle caps, water bottles, soda bottles, pop tops, dental floss, candy wrappers, cigarette butts......not just a few here and there, but sometimes piles.  In most cases the dumpster was less than 10 seconds away......sorry for the post holiday rant....I feel much better now.

TLE and I were off by 3:30 and ensconced in our lounge chairs by 4 pm to watch the Women's World Cup final between the USA and Japan.  Four years ago we also played Japan in the final, and the match was tied 0-0 at the end of 90 minutes, and was still tied 0-0 at the end of 30 minutes of overtime, and went to 'kicks from the mark' to decide the winner.  We lost, and it was devastating as we had dominated the game, but just could not put the ball in the back of the net.  In Sunday's final the USA scored their first goal 3 minutes after the match began...Carli Lloyd scored goal number one.....by the 15 minute mark Carli had scored her third goal.....a 54 yard shot that went over the goalkeepers head......and the score was 4-0!  The final score as the final whistle sounded was 5-2, which included an 'own goal' by the USA.....let the celebrations begin!  USA!  USA!  USA!

We capped off our evening watching recorded episodes of 'Last Ship' and 'Fallling Skies' and were in bed a little after 10, but that was not the end of my day.  About 11 pm I was awakened by loud laughing and yelling, which did not abate, but only got worse.  I finally had to get dressed and walk 7 sites down to the tent area to quiet the dozen, or so folks gathered there who could not have cared less that they were disturbing the peace of their neighbors.  I called in the overnight Ranger (Merlin - retired law enforcement) to hold a 'coming to Jesus' meeting with them, and order was restored........tenters........hmmmmm.

Thanks for stopping by.....
Posted by Whatsnewell at 7:10 AM