I haven't written out my own 'honey do' list for a long time, but there were a few things I had been meaning to take care of for a few weeks, and a couple of routine things that I had to write down, or I would forget again to do them.  #1 - For a while now the face plate on our soft soap/hair shampoo dispenser kept falling off every time I pressed one of the buttons....that was number one to fix.  I would promise myself as I was getting out of the shower that I would glue it as soon as things dried out, and then would forget again until my next shower. 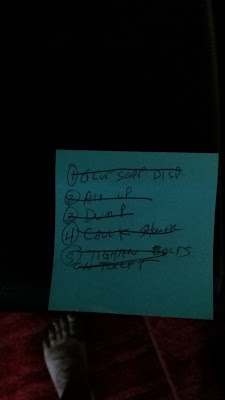 #2 - Air up the coach.....whenever it gets cold we lose some air, and instead of starting the big Detroit Diesel I just hook up my 'pancake' compressor to the quick connect air chuck in the engine compartment and air the system up again.....we've been here two months and this is the 4th time I've had to do that, but the first time in 3 weeks as it has been warmer until a week ago.

#3 - Dump the black tank as I won't have time for another week.  Then there was #4 - Caulk the shower.......that is another thing I kept forgetting to do each time I got out of the shower I would let things dry out, and then would forget to follow through.  That is now done along with the repair of the dispenser.....finally!

Last, but not least, #5......Tighten the base of the toilet....I had been noticing that there was a slight 'rock' to the toilet and knew what needed to be done, but would forget as soon as I would leave the bathroom.....a few twists of the two nuts that secure the toilet in place and all is well again.

With the list out of the way I headed over to a local Smog Check place to get the VW smogged so I can, in turn, get the 2016 tag for the license plate, but that endeavor was unsuccessful as I need to take it to a "Gold Star" location, and the nearest one is in Placerville.  Since I am going back to SoCal in a few days I called my mechanic down there (Joel's Automotive) and made arrangements to get it done on Thursday afternoon.  From there I headed over to Napa Auto to see if they sell the large 8D battery I need to replace the one starter battery that went bad in Bishop, CA back in early May on our way up to SLT.  They do have them in stock for $199 plus tax and they agreed to deliver the new battery to my coach and pick up the dead one....I'll take care of that early next week before we leave for SoCal.

I managed to get back on my bike for the first time since it nearly bit off the tip of my finger on my ride around the lake.  I decided to just ride up to the end of the bike path and back making for a nice 11 mile round trip ride.  It's still a little awkward to grip the handle bars, but things are getting better.  Another sign things are getting better is I can now type pretty normally once again.

Around 4:15 pm we headed over to Coldwater Brewery to meet up with our college friend, Terri....she lives near Reno and offered to drive up to SLT for an early dinner, so we decided on Coldwater for dinner.  TLE and I shared the Salmon dinner, and I added a Caesar salad as a side....the salmon and salad were exceptional, and, of course, the brews were great too.    We agreed to meetup with Terri again at Squaw valley in 3 weeks to go riding along the Truckee river.

Well, it's back to work Saturday, but it was a nice, relaxing, rejuvenating two days.....thanks for stopping by!
Posted by Whatsnewell at 7:09 AM