The campground was still very full Monday morning when TLE and I clocked in for the day.....in fact it felt more like a Saturday than a Monday.  I was still feeling a little groggy first thing in the morning from our fast 4 day trip to SoCal and back, and really didn't start feeling like my old self until late in the day.  I wouldn't exactly call it 'jet lag', but it sure felt a lot like it. 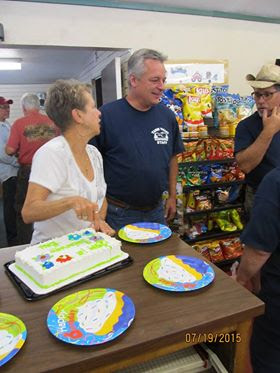 ......yup, I'm never very far from cake.......the day was a normal Monday.....nothing out of the ordinary and most of those departing did so on time with a few exceptions.

Our VW performed flawlessly on our 1,000 mile odyssey, which is all one could hope would be the case......I was a little disappointed in our gas mileage, but then again we were hauling my bike which, sitting sideways on the bike rack, catches a lot of air and no doubt is the primary reason for the poor mileage.  On a positive note, however, with the new fuel pump we were able to shift into 5th gear on the long climbs and cruise at 70 mph.....last year that was not the case....we had to keep down shifting to 4th on the same long climbs.  At the time I thought it was the failing turbo, but the only thing that is different this year is the new fuel pump.

I was off work about 3:45 and home sitting outside watching Stage 16 of the Tour de France, and taking a much needed nap.  TLE followed a little after 5 pm.....a nice way to end the day!

Thanks for stopping by!
Posted by Whatsnewell at 7:01 AM