Our five day work schedule (only three this week due to our wedding hiatus) is Saturday through Wednesday, making Wednesday feel like our 'Friday'.  My 'Who's In the Park' list showed 283 sites occupied.....43 arrivals were scheduled, and a like number of departures....a typical July Wednesday.

I finished my first circumnavigation of the campground by 10 am with no issues apparent.  From there I decided to continue repairing a few sections of fencing along Melba Drive in 'G' Section.  Over time people taking short cuts had crushed down the fencing in a few places.  I once again used my 'come along' to stretch the fencing back into shape and then re-attached it back in place with heavy gauge wire.....heavy enough I hope to prevent it from easily being cut, or broken.  By the time I finished I had fixed 5 sections in all....there are still a few more sections in need of attention in 'G', but that will be for another day.

By that time it was approaching 1200 hours and the arrivals for the day were beginning to flood into the park, so I positioned myself and my cart near the Thousand Trails office to intercept arrivals and send them directly to their sites to keep the office from backing up......during all this a new storm rolled in as forecast, and it began to rain to the accompaniment of thunder.....not hard, but very steady.  Within an hour the rain abated, and I went to lunch.

Most of our departures were gone by 11 am, but a few persisted....by 1 pm there was only one departure left, and he decided to extend his stay one more day.

I was on my way home by 4 and TLE followed 30 minutes later.....as is our custom we walked over to 'Custom Cue' for our weekly dose of their fish tacos, and a pitcher of 'Downtown Brown' ale....a great way to decompress from our work week.  On our way back to TVC I stopped briefly in the parking lot of Raley's to snap this picture...... 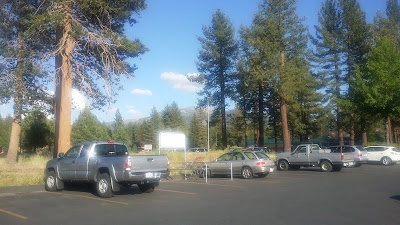 ....it's what I love about living the summer in the Tahoe Basin......mountains in every direction you might look.

I spent part of the evening watching Stage 17 of the Tour de France, which was four hours long!  Thankfully I was watching the recording of it and was able to fast forward through the commercials.  Regretfully, TeJay Van Garderen, an American, who was in 3rd place, had to abandon the Tour due to a severe chest cold about 50 miles into the day.....
bummer!

We were in bed just after 2200 hours and looking forward to sleeping in Thursday!  Thanks for stopping by!
Posted by Whatsnewell at 9:25 AM