TLE and I clocked in at the office at 7:30 am Wednesday......yup, we're now opening the office at 8 am once again.  I actually like the early opening as we will be done with our six hour shift by 2 pm, which means when we go to our 8 hour shifts in June we'll be off at 4 pm......meaning we will still have a lot of daylight left to do other things after work if we so desire.

After helping TLE open up the office/store I headed out to do my first site check round of the day.  I had barely finished with Section G when Robert (TVC General Manager) drove up in the campground truck with a load of lumber from the demolition site I wrote about down on Kahle at Stateline.  He wanted me to unload what he had and then drive the truck back to Kahle where Miguel (Head Ranger) and Adam (Maintenance Manager) were preparing another load of 2 x 8's.  Walking around a demolition site where there is a lot of debris including boards with nails sticking out of them is not my ideal, so I was not looking forward to returning there.  As things turned out by the time I unloaded the Ford P.U. and drove over to Kahle Miguel and Adam were done with demolition, and just waiting for me to help load up the additional scavenged lumber and return to TVC.

I'm sure some are wondering why we are spending parts of 3, or 4 days scavenging lumber.....well, we are building a golf cart charging station that will hold 6 to 7 golf carts while they are being recharged for the following day, plus keep them somewhat out of the weather, especially during the winter.  If we had purchased the needed lumber and other materials retail it would have cost us hundreds of dollars, if not a couple thousand, and cut into our budget for other things that will benefit the customers....so there you go.

We had another staff meeting around 10:30, and then I helped Miguel pick up tree branches which had been trimmed off trees throughout Section F....we have contracted with a tree trimmer to cut low hanging dead and living branches, as well as dead trees that interfere with RV's in the various RV sites, and along the paved interior roads.  To save a little money we are picking up the trimmings.....he gets to keep the bigger wood to sell as firewood.

Around 12:30 my stomach began reminding me in a most instant way that I hadn't taken a lunch break, so I took a 30 minute lunch, and then finished my last hour of my shift doing my final site check round before clocking out just after 2 pm.

My intent was to do a little work on my bikes, then take a bike ride, but as I was working on the bikes I began thinking about all those decorative holiday lights I had not yet deployed, so after I finished the work on my bikes I shifted gears and began pulling out all of our Christmas lights.....by 4:30 they were deployed, and our site was looking more like OUR site once again...... 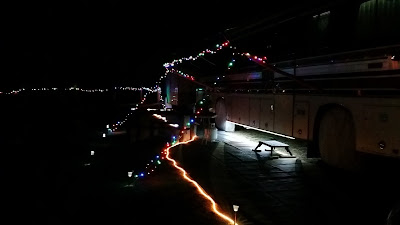 ....we are off work for two days beginning Thursday and I am looking forward to sleeping in....it has been a good 12 days at TVC....we just finished our first pay period, which began April 27th, and will be getting our first paychecks May 18th. It will be nice to see excess dinero flowing into our checking account for the next 4.5 months!

Thanks for stopping by!
Posted by Whatsnewell at 9:16 AM