The day, November 10th,  advance ticket sales began for 'Star Wars: The Force Awakens' my daughter, Meredith, had already taken a survey of family and friends who wanted to attend our annual family Christmas movie adventure and knew she needed 18 tickets!  She went on 'Fandango' at the magic hour and managed to get all 18 tickets just before their website crashed.  We chose the 10 am showing at the AMC Theaters at the Ontario Mills in Ontario on December 26th, and I am glad we did.....that was the first showing of the day, and if we had chosen a slightly later time we would have been hard pressed to find a parking spot.  It was, after all, the day AFTER Christmas and the hoards were out shopping for great AFTER Christmas deals. 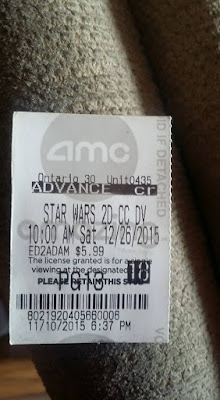 First of all, we ALL loved the movie!  Let's just get that out of the way.....and apparently a lot of people around the world love it too as Disney has pulled in almost $1 billion in just the first week.  We loved how they hardly changed anything from the original that was released back in 1977......they even got the entire original cast back for this relaunch.  I'll stop there in my description of the movie so as not to spoil it for anyone who has not yet seen it......suffice it to say we would all give a 5 star rating (1-5 scale) to this movie....it far exceeded our expectations. Here we are almost 40 years later and this franchise is still going strong.  By the way, I did not know this until yesterday, but Disney paid George Lucas $4.05 billion for the Star Wars franchise with plans to make the current trilogy of which 'The Force Awakens is the first, plus a few other installments. 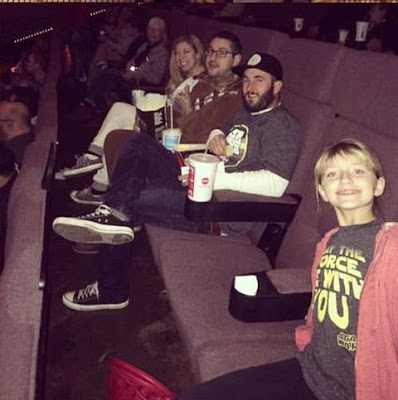 TLE and I arrived around 0920 to find our daughter Meredith, our son Tim, and his girl friend Laila saving 18 seats.....we took up the better part of one row!  The movie ended about 1230 hours (it's about 2.5 hours long), and we headed off to Graziano's Pizza for lunch, and to continue our discussion about the movie.  I was surprised how many Star Wars oficionados there were in our group.....most of these folks were not alive in 1977, yet they knew more than I. 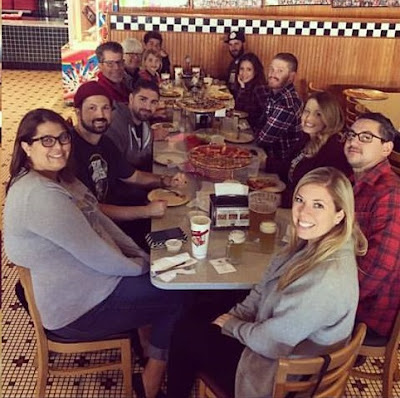 Of course, in order to have a proper Star Wars discussion at a pizza place I had to order a pizza with Anchovies, and a pitcher of Shock Top brew.  By the time we finished the pizza and beer, and had come close to exhausting our discussion of the topic it was after 1400 hours and time to head for home and a nap.....lol!

I spent the rest of the afternoon watching the first wave of eBay bike items I listed a week ago closing on eBay.....out of the first 20 things I listed 19 sold!  I've got about 20 more to go over the next two days.