Another cold day was Wednesday.....we had planned to take a ride on the Santa Ana River Trail from Anaheim down to Newport Beach, but it is just too cold, so we postponed it for a couple of days......neither of us do 'COLD' very well anymore, and since there is always another day, theoretically, why ride when it's too cold, right?  Instead I spent some more time cutting up the debris I had trimmed off the pomegranate bush a couple of weeks ago....after filling yet another waste barrel I still have enough left to fill one more.....some jobs are never done.......I'll leave that for another day.

Around noon time I drove over to the local Lowe's to pick up a few things including some more wet/dry sandpaper so I could work on the passenger door panel on the VW and get it repainted, and cross that item off my 'TO DO' list.

I was back by 1330......yeah, I know, it shouldn't take two hours to go to Lowe's and back, but it is Lowe's after all......and got to work removing the door panel so I could strip the bad paint off, sand it, and then paint it.  While the paint on the passenger door was more intact than that of the driver side door, it was much easier to remove.  I didn't even have to use the heat gun to remove 80% of it.....just a putty knife.  For whatever reason when those door panels were painted at VW they were not prepared properly, because it appears the paint never adhered to the surface.

After all the paint removal, sanding and masking off the areas I didn't want painted, the panel was ready for application of the glossy black Rustoleum spray paint around 1530.  Of course, spray painting the panel took less than 5 minutes and it was just a matter of letting it sit for 6 hours before reinstalling the panel Friday.  Let's face it, neither paint job I did is factory quality, but they both pass the 'five foot' test.....they look good from 5 feet away....and they look so, so much better. 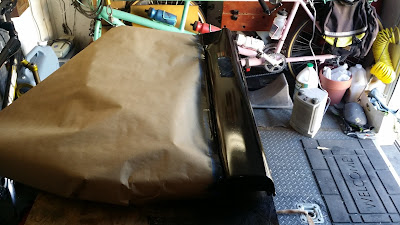 There are now only two items left on my 'TO DO' list......1) Remove and 2) Repair the Suburban gas heater and remove and replace some damaged floor panels......easy peezy!  Well, at least the flooring part should be easy peezy.....I'm a little uncertain, as I always am, with the gas heater project, but I shall proceed with style.

Wednesday was also the night of the  3 hour 'Survivor' finale.....this season has been one of our favorites because nothing was predictable until it got down to the final three......to me it was obvious the winner would be Jeremy, and he was....he got all 10 votes of the jury.

Posted by Whatsnewell at 9:04 AM