Friday marked one week until Christmas......it was the first day of Christmas Vacation for school kids.......yeah, I know, "they" (the PC patrol) call it 'winter break' now, but 'Christmas Vacation' just has a little more cache for me, so I'm sticking with it.  Christmas Vacation means there are fewer vehicles on the roads and it was definitely noticeable as we drove up and over to Rancho Cucamonga to fetch our dwindling supply of Christmas wrapping supplies from my son's office in order to prepare our Christmas present offerings for delivery by Santa.

From there we headed over to 'Active Ride Shop', just a couple of blocks away, to acquire the final present for my oldest grandson.....wouldn't you know what we wanted for him is on back order, but it should be in by Tuesday, or Wednesday next week......yep, cutting it close!

We were back home just before noon time dropping off the wrapping supplies, and then we drove over to 'Smart and Final' to pick up a few things, and I to 'Office Max' (right next door) to pick up a few packing supplies for the bike parts I will be mailing out in about 10 days, then over to the Riverside Main USPS to pick up some 'Flat Rate Boxes' which will be used religiously in this endeavor.

I spent the rest of the afternoon cleaning and preparing bike parts for photography, sale and shipment, and what an enjoyable afternoon it was.  While cleaning the parts from the Tomac 98 Special I decided to go through my own personal stockpile of bike parts start culling out what I will probably not personally use.....time to get those parts into the hands of someone who will use and appreciate them, so my eBay auction just grew exponentially in size and scope.  I have forgotten how much I have been carrying around. 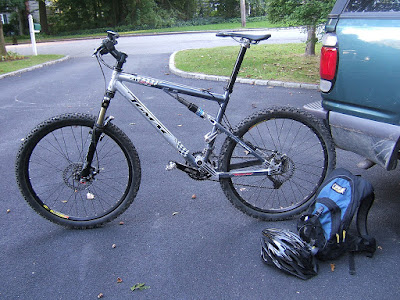 A reasonable facsimile of the one I bought on Craigslist

Interestingly, about 9 years ago when we were beginning to think about becoming nomads TLE suggested I start thinning out my bike parts inventory.  At the time I had never sold anything on eBay, but she suggested I list a few things and see if I could sell them instead of just tossing them out......you see, most of my inventory was considered 'old technology' in the mountain bike world.  I was always upgrading the components on my 'bikes', and assumed the old stuff I had removed had no value anymore, but was I ever wrong.  I had about 4 milk crates full of 'old technology', and ultimately realized about $5,000 in eBay sales over the next year.  It was then I realized I could buy older bikes on Craigslist at under market prices and part out their old technology piece by piece on eBay, and I have been doing just that, when I have the time, ever since.

As I have have written before, when I am in the trailer working on bikes, or cleaning bike parts the time just melts away, and before I knew it the sun was setting in the western sky, and it was time wrap it up for the day.

My son, Tim, and his girl friend, Laila, invited us out to dinner at the Salted Pig (one of my favorite local eateries) at 1930 hours, but when we arrived there was an hour wait (they don't take reservations), so we had to come up with a 'Plan B'.......Plan B was to drive down to Pepito's Mexican Restaurant, which we did.  We arrived just before 2000 hours and were promptly seated at the last available table.....cool.  Yelp gives them 3.5 stars, but TLE and I would fall solidly in the 4+ star range.....the food, drinks and service were exceptional.   We laughed and talked for 2 hours, and by the time we paid our check and walked out the door it was after 2200...... 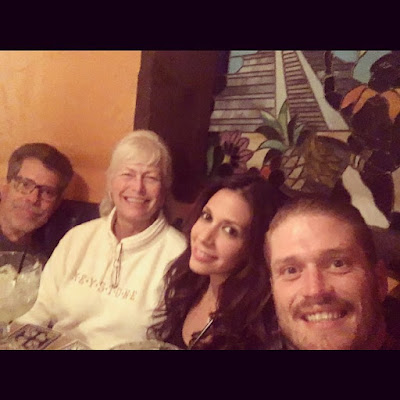 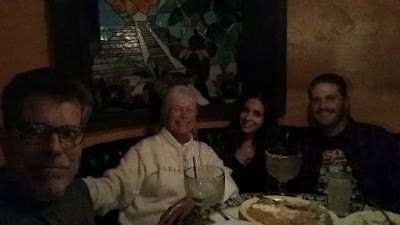 ......Tim and Laila are old souls.....they love to talk about music, movies, etc. that TLE and I grew up with so many years ago.  We always have such a great time with them, and the time just melts away.  Thank you guys for spending time with the 'young at heart old farts.....:-)

Thanks for stopping by!
Posted by Whatsnewell at 8:21 AM