One thing we have been trying to do is to walk consistently......maybe not every day, but a majority of days each week.  One of our favorite walks is walking west on Mission Inn Ave. past the Mission Inn all the way to the Mt. Rubidoux Road bridge that spans Mission Inn Ave. on the western boundary of the city.  It is exactly 1.5 miles to the foot of the bridge..... 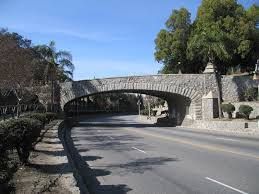 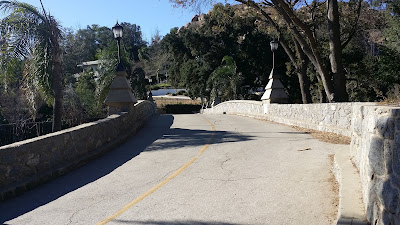 .....sometimes we walk over the bridge to University Ave. and back east to our 'home'.   We left for our Tuesday walk about 1015 hours and averaged close to 4 mph all the way to the bridge.....how,  you might ask?  Well, sometimes we hit all the street lights perfectly, and that was the case Tuesday.....not so much on the way back when we hit 3, or 4 red lights.

We were back home before 1130, and TLE got ready to drive over to Claremont for her hair appointment with Amanda at Forte Salon on 2nd Street, as well as to do some Xmas shopping.  While she was gone I went about getting the leather Harley Davidson jacket I had sold on eBay for my son-in-law, Nick, box up for shipping to the buyer.  Nick used to have a Harley, but now that he is a family man (married to my daughter, Katie) he sold it.  Since he no longer has the motorcycle he decided to sell the $400 jacket, which he had only worn a handful of times.  I had listed it on a 'Buy It Now' auction for $300 with the option to 'Make An Offer'.  Nick's lowest price he would accept was $200, but I got an offer for $250 within 24 hours and we sold it. 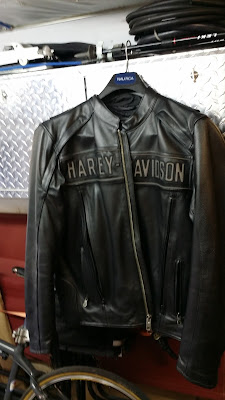 TLE was back a little after 1500 hours, so we traded places and I ran over the USPS to drop off the box containing the jacket, and was back by 1545 (rush hour traffic, even street traffic, is no fun in Riverside......:-)

We have pretty much finished our Christmas shopping.....most of it done via Amazon.com Prime.....I think we have maybe one more gift to acquire and we are done for another year....whew!

We spent the rest of the afternoon reading, then around 1800 we began watching a few recorded shows and were heading for bed by 2230......