Ahhhhhh.....real Saturday......crystal clear blue skies, warm sun, low humidity......the reason why people who look out their windows to see snow on the ground every day this time of year decide to move to SoCal.  It does get a little cold at night......sometimes as low as 42 like it was last night......those living in the 'snow belt' this time of year would love to see a high of 42.  I'm sorry, I'm being a little snarky aren't I?  I do feel badly for those who must drive through a tunnel of snow every day.

One of our favorite things to do on a 'real Saturday' morning is take a walk with a stop at Simple Simon's thrown in along the way for coffee and pastry.  We headed out for our 3 mile walk sometime after 1030, made the turn around at the Mt. Rubidoux bridge around  1100 and were at Simple Simon's by 1120 enjoying al fresco dinning, a great coffee and for me a bagel.

Something we don't usually do on a Saturday morning, though, was our next stop at the 'Gender Determination Ultrasound' clinic.....at least I think that is what it was called.....:-)  As many of you know we are expecting two grand babies in 2016 (Sharon is due in February and is having a little boy, and Katie is due in June.....sex to be determined on real Saturday).  They have this cool room they take the entire extended family into with a big screen TV on which you can watch as they do the ultrasound.  It took a while, but ultimately the technician said she was 85% sure It's A Girl!  Many congratulatory hugs were exchanged at the news and then we were off to walk the final 1/2 mile home.

TLE had promised Jambalaya for dinner for everyone who was coming over to the house to watch the UFC fight between Colin McGregor and Jose Aldo for the UFC Featherweight title, so she left to go shopping for a couple of hours while I puttered around the coach.

Around 1900 hours the kid's friends began to arrive to watch the 'pay per view' fight.  There were a number of under card matches that came before the title fight.  The actual fight we were all interested in seeing did not come on until sometime after 2100, and it was over in 13 seconds as McGregor threw a left cross hitting Aldo in the jaw dropping him to the canvas like a bag of rocks.  In fact, it was so fast and unexpected I was a few seconds late getting in front of the outdoor TV and had to see the knockout on 'replay'.  I'm not a UFC kind of guy, but I do watch from time to time out of curiosity, especially when there is a title fight my kids are going to watch.  It is so rare that any fight is over this quickly. 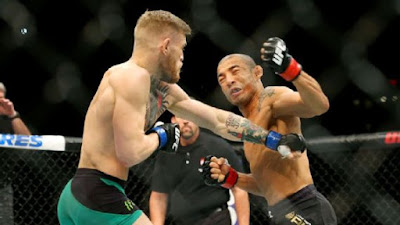 The left cross....Aldo is already knocked out, but doesn't know it yet (photo courtesy ESPN).

Thanks for stopping by!
Posted by Whatsnewell at 8:59 AM