With the dawning of December 24th we had acquired the last large box for a special gift for one of my children.  Every year our family draws names to buy a gift for one family member.....all of the adults buy gifts for all the grand children under 18.  This year I drew my oldest son's name......I never know what to get Chris he usually gets whatever he wants when he wants it, so I usually send a message to Rochelle, his wife, and she immediately responds with an idea.  On occasion I will get a second gift for one of my other kids if I come across something I know they will like, and this year I found something I know my oldest daughter will like, but it required a very large box.  Now that we have found that box, and all the presents we bought online for our grandchildren and the one TLE got for our youngest son's girl friend, Laila, it was just a matter of getting everything wrapped. 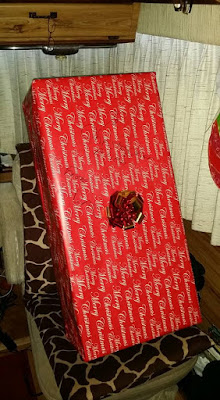 Most of the gifts.....a couple of the large ones were in the trailer when I took these pictures 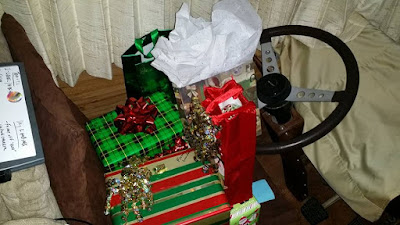 That was the first face of Christmas Eve......

The rest of the day I devoted to doing some shopping for myself......not necessarily of the Christmas variety.  The last couple of times I used my portable macerator pump I had noticed it making a funny sound, and at times it would overheat and shut down.  Since we are in a place were the use of the pump is a requirement I decided to order a replacement pump and not wait for the 8 year old Jabsco to fail.....I got a text message notifying me that the new macerator pump had been delivered, so I walked out to the front of the house and picked got it from the front porch.  Next I headed over to ACE Hardware to pick up some of their 'rope' lights (on sale for 1/2 price.....these things have a life span....over the course of the past year 2 of my four 18' lengths of rope lights had failed), and some additional supplies for the new macerator pump.....2 feet of clear 5/8" hose, plus male and female hose fittings.  The clear hose will enable to me to know when the tank has been properly flushed.....the clear section of hose will allow me to know when the discharged water is running clear.

Then it was off to Autozone to pick up a 20 amp switch to wire into the pump so I can turn it on and off without disconnecting the power wire, and a new gas shock support from the VW engine hood......it recently failed.....how did I know you might ask?  Well, the hood fell on my head!

I was home before noon, and deep into my projects.....by 1400 I was finished, and decided to take another 20 mile bike ride to round out the afternoon.  When I left I was thinking I might have dressed to lightly, and usually within 10 minutes I've heated up from the exertion, but the temperature was dropping, and by the time I returned about 90 minutes later it was very cold, and so was I........I took a nice, long hot shower as my reward for burning another 1300 calories......that was the second face of Christmas Eve....

We've been kind of in the movie watching mood lately and decided to watch a couple more we had not seen on the big screen when they were realeased......'American Ultra' (2015, Jesse Eisenberg, Kristen Stewart, 3 stars on IMBD), and 'Elysium' (2013, Matt Damon, Jody Foster, 3.5 stars on IMDB).  We actually enjoyed both of them quite a bit!

We were in bed by 2300.......we'll be up early Christmas to head over to my oldest son's home for Christmas breakfast and our family gift exchange.......Merry Christmas to all!

Thanks for stopping by!
Posted by Whatsnewell at 7:22 AM