As many of you probably guessed yesterday I had one of those days when the words would just not come.  I sat over my laptop for 90 minutes and managed two and a half cryptic paragraphs.  I finally decided to save what I had written and return to it later in the day to see if I felt any more inspired, plus we had an early 0915 appointment in Rancho Cucamonga at our optometrist, and it was time to get ready.

Thursday was the day for our annual eye doctor appointments.  Two years ago my optometrist advised me I had cataracts, and would probably need surgery in a few years.  Well, as of Thursday my left eye has officially turned from being far sighted to near sighted.....I can still read fine with glasses, and even sometimes without glasses, but forget anything in the distance with my left eye.  So, my next appointment will be to visit Pacific Eye Institute and get 'er done.  Other than the cataracts my eyes are healthy.  TLE had a very good exam......she needs an adjustment to her prescription for her left eye, but otherwise nothing has really changed.

To get to our appointment on time we left at 0830 expecting a half hour drive, but rush hour traffic added 10 minutes to that, and we arrived just a few minutes before our appointments.  I've already provided the results (above) of our eye exams......from there we headed over to Costco to pick up a few things, and were home by 1130.

I noticed on the way home that the door opener assembly on the driver side door panel had come loose.....I probably didn't put it back in properly when I had the door panel off a few weeks to fix the power mirror module, so I changed clothes and got to work removing the panel.  In the middle of that I decided since I was taking it off again I was going to strip the bad paint off the top of the panel and repaint it before reinstalling it. 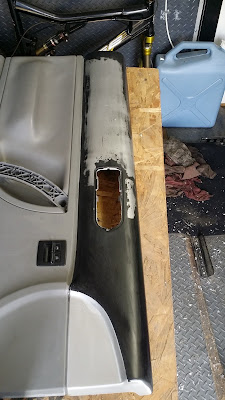 The paint partially stripped off 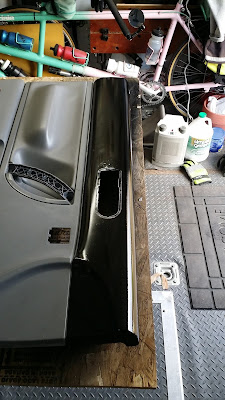 All finished and ready to be reinstalled 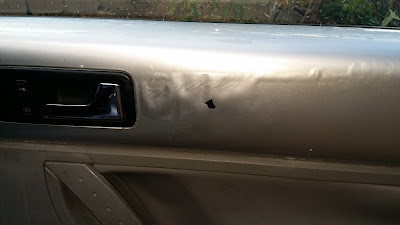 For some reason the factory paint blistered and has been coming off.....this is the passenger side door panel....not quite as bad as the driver door panel, but getting worse by the month.

Initially I tried to sand off the paint, but that was going to be a long, long process, so I got out my heat gun and with TLE's help holding the panel and a putty knife I removed the old factory paint that was gradually chipping.  As is always the case when paint is involved, the preparation took 85% of the time....the actual job of spray painting the panel black took 5 minutes.  I think it came out pretty well.  You may be wondering why I painted the panel black instead of gray.......any paint job I would do will have some blemishes.....the black hides the blemishes, whereas the gray will just magnify them.  I checked into buying used replacement panels, but they run anywhere from $250-400 dollars.  I think my solution is more cost effective.

That took most of the afternoon, and by the time I was done the sun was getting close to the eastern horizon.  I didn't reinstall the panel as it takes at least 6 hours for the paint the dry, and I'm not in a rush anyway, right?

The TNF game between the Vikings and Cardinals was a good game and was decided on a sack/fumble by the Viking quarterback (Teddy Bridgewater) with just seconds to go giving the Cardinals a 23-20 win.

I finally completed yesterday's blog entry about Wednesday around 1900 hours and published it then.  I also promised a couple of blog entries from TLE, and the first of those will be published later today.

Thanks for stopping by!
Posted by Whatsnewell at 8:26 AM