Friday was heavily overcast most of the day, and it was correspondingly cold!  I spent the better part of the morning cutting up and disposing of about half of the trimmings I created when I trimmed the pomegranate bush......I had to wait until the city provided trash can reserved for grass clippings, etc. was emptied by the garbage truck Friday morning.

I also needed to ship out the Blue Sky Solar charger I had sold on eBay Wednesday.....this is the one that was removed in favor of a larger wattage version when we added the two additional solar panels in October....I received $102 via auction.  Since the VW was in the shop I decided to combine a longish bike ride with a trip to the local USPS.  After getting the charge controller out via Priority Mail Medium Flat Rate Box I continued on my ride out to the SART trail (Santa Ana River Trail), up to Fairmont Park, around Lake Evans, then up Mt. Rubidioux Drive to the top of Mt. Rubidoux.......... 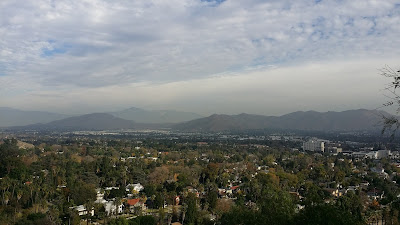 Looking east about 1/2 way to the top 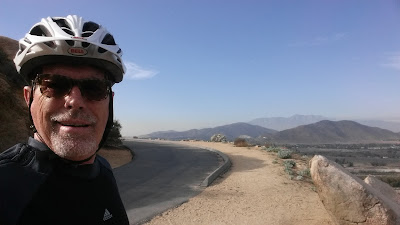 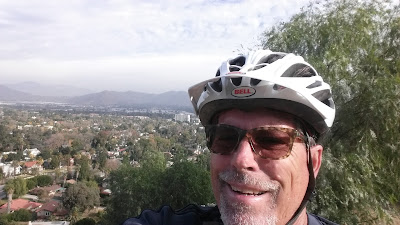 .....in all I covered just over 15 miles.....the longest ride I've done in quite a while.  According to my Garmin Edge cyclocomputer I incinerated 1023 calories.....I need to do more of that. The views climbing Mt. Rubidoux were spectacular as you an see from the pix above.

That was pretty much my day.......TLE spent part of the day doing a little deep cleaning in the coach, then relaxed with me after I returned from my ride.....it was a good day.