Sunday can be summed up this way........NFL.  We pretty much stayed inside all day as it was cold and cloudy.....never got above 57 degrees.....we never turned off the electric heater in the salon.  So, I apologize for being rather shallow this morning in describing Sunday, but that is just the way it happened.  We were basically slugs the entire day.....so what do I write about?  I can't just end the blog after writing a shortish paragraph, can I?  Of course not!

I've been thinking about the last year and how few miles we have traveled, how we really haven't seen too much that is new to us, other than our brief jaunt down US 395 from Spokane, WA to Susanville, CA in November.  Are we getting set in our ways?  To some degree I guess......the past two years we have done pretty much the same thing.......spent time in northern Arizona, and southern Utah, spent the summer at South Lake Tahoe and fall at Cape Blanco, then home for the holidays.

There is a kind of yearning in my soul to get back out there and do something different, especially now with diesel prices at 8 year lows.....I'm seeing diesel prices under $2/gallon around the country, which means the cost per mile has never been this low for us since we began our nomadic wanderings almost four years ago now.  Our first full fill up back in February of 2012 cost us $3.59/gallon, and we thought that was a great price, which it was at the time.  That was the lowest price per gallon we paid until we filled up just after our Amazon gig last December for $2.29/gallon......that's a $234 savings per tank (180 gallon tank)!  So, why aren't we out there piling the miles on taking advantage of low diesel prices?

There are several reasons, which I have written about, why we have confined our travels to California, Arizona, Utah, Idaho, Oregon and Washington.......dental needs, family weddings, pregnancies, but there is another reason, for me anyway, that I haven't written about, that makes it easy for me to stick to our 6 state circuit.

I know I'm not the only one who thinks about this......no, a better word is 'worries' about this.  When you buy a large Class A motorhome you worry about the worst case scenario.......covering the cost of an engine, or transmission failure.  The first 2+ years I kind of pushed that scenario to the back of my mind, but the longer we have gone without a major problem....forget that.....without even a significant minor problem, the more the odds seem to favor something big going wrong.  One of the reasons this fear has come more to the forefront of my mind is we have nomadic friends who have faced this kind of catastrophic failure in the recent past.  Here's the thing.....I know they were meticulous about maintenance on their Class A's, but suffered catastrophic failure nonetheless.  We have had just two significant, to us, issues since we hit the road early in 2012......the engine water pump failed, and then a year, or so later we filled our diesel tank with medium grade unleaded by accident.  Compared to a blown engine ($25-30,000), or blown transmission ($5-10,000) replacing a water pump (I did it myself) at a cost of $87, or having your fuel tank pumped out at a cost of $150 are extremely minor.

In the case of the water pump failing, it did not happen on the side of the Interstate in West Texas in the middle of no where.....it happened in the backyard of my sister-in-law.  In the case of the diesel fuel mishap it happened in a convenient place where we had friends nearby who came over to provide moral support, as well as solutions.......those same friends, by the way, suffered one of the catastrophic engine failures I alluded to to earlier a few months later in the middle of no where with no cell phone coverage.  When something like that happens to a friend it is no longer theoretical.....it is right there in the forefront of your mind.  I find myself struggling with thinking it's safer to stay close to home base in case anything of a big nature goes wrong.  That all these other things have come up (grand babies, weddings, dental issues) makes it easier to give in to the fear.  This is one thing that so many are concerned about......being broken down on the side of the road for hours and hours and being at the mercy of mechanics you know nothing about charging you 10 times what it should cost. 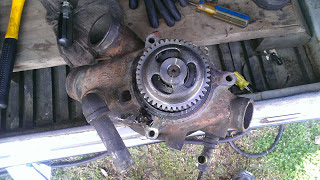 The longer our streak continues with no major problems the more I think about 'what if?'......it is only natural, and I know I'm not the only one who worries about 'it'.  I guess just writing about it, and putting it out there helps.  In the end I know intellectually that it's not IF 'stuff happens', but WHEN.  All one can do is to take care of periodic maintenance, replace those tires when they get to 6 years old, and check your engine/transmission on a regular basis looking for potential problems, or warning signs hoping to nip potential problems in the bud.

When I think about it I realize when I lived in a 'sticks and bricks' home I worried about catastrophic failure a lot.....what if my HVAC bites the dust?  What if the ubiquitous Santa Ana winds blow my roof off?  What if a toilet decides to back up while we are gone on vacation and floods our home?  All those things are possibilities, of course, just like there are big things which can and do go wrong in an RV.  The question is do you let that worry/concern paralyze you, or do you get on with your life?  I choose to get on with my life and stop worrying about it........most of the time.