Tuesday, December 29, 2015........what a busy day!  I was operating simultaneously on two different tracks most of the day.......1st track - get the bike frame, suspension fork and front wheel from the Tomac 98 Special boxed up and shipped.......2nd track - put all the stuff away that had exploded out of our storage areas over the 5 weeks we have been here in Riverside. The first one was very well defined and I knew the packing part would take an hour, or two, but the second was gnawing at me all day Monday, and Tuesday morning as I surveyed what must be done so we can roll our wheels by 1000 hours Wednesday to head for the lower desert.  The trailer was a complete disaster, and to a reasonable person looked like it might take all day if I had nothing else to do.

So, the only way to begin a marathon is to take the first step, and by 0900 I headed out to the trailer to box up the aforementioned items for shipping.  I've boxed up quite a few bike frames over the years, and know what needs to be done to keep the frame from getting damaged in transit.   Next was the wheel, and that took just a few minutes......the hard one was the suspension fork.....I had to essentially make a box from scratch starting with a much larger box, and  then cutting it down to size.  By 1030 the items were packed, addressed and ready for delivery to the USPS and FedEx.  In the case of the fork the USPS had the best price using Priority Mail.  FedEx had the best shipping price for the frame and wheel.

While all this was going on TLE was out making a BIG shopping run for supplies we need for the next 3-4 weeks of boondocking.....before she left she helped me pull up the somewhat damp awning mat (remember Monday's rain) and lay it over some patio chairs to dry out in the sun.  By the time I finished boxing up the bike stuff the mat was dry and ready to be swept off....I waited for TLE to return to fold it up.

Next up I had to tackle the trailer......by the time TLE returned around 1230 I had the trailer under control, and it was time for me to deliver the boxes to the shippers.  I stopped at the downtown Riverside USPS first to drop off the fork box, then headed south on Market to the local FedEx retail outlet to drop off the frame and wheel boxes.....by the way, FedEx has really streamlined the process to ship a box, and with Daisy's help I got the final two boxes shipped in just a few minutes....you used to have to fill out a 3 part form with a lot of information, but now all they need is your name and address, and the name and address of the person to whom you are shipping the item.....if the information is already on the box you don't even have to do that now.  As it happens there is a Subway in the same building, and I had not had lunch yet, so I stopped in for a Club, then headed back home to finish my marathon day.

One thing I was looking forward to was using my new macerator pump to dump the black tank one last time before we depart.....it worked quite well, and with the addition of the short section of clear hose I can now tell when the water is running clear, and the tank is clean, plus it pumps so much faster than the old tired one that was giving up the ghost.  Just as the sun was setting in the west I finished putting the various hoses away, and locked up the trailer.......it's a miracle! 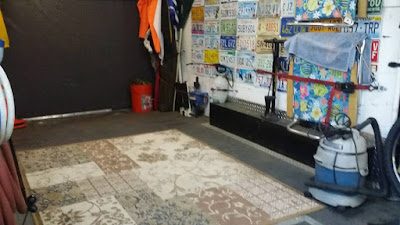 She cleans up nice!

I spent the evening watching a couple of college bowl games, and relaxed after a very long day........the Tuesday marathon is finished, and we are ready to roll.....hoping to depart by 1000 hours Wednesday for Ocotillo Wells....thanks for stopping by!
Posted by Whatsnewell at 7:35 AM