TLE and I started off Sunday with a 3 mile walk, which included a stop (on our way back) at Molino's Coffee for coffee and a bagel (blueberry muffin for TLE).....Molino's is located directly across the street from the Mission Inn...... 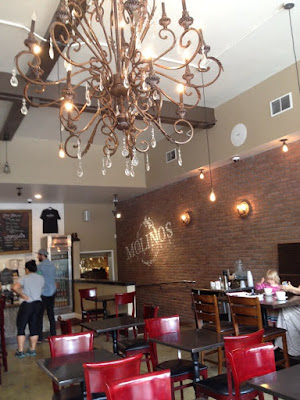 ....Yelp gives them 4 stars on 202 reviews.....we would be closer to 3.5 stars based on the very slow service.....to be fair, they appeared to be understaffed for a Sunday morning.....we'll give them another shot in the future.  Of course, our favorite coffee/breakfast place is Simple Simon's which I have written about several times over the years, but they are not open on Sundays.  The coffee and bagel were very good.....it just shouldn't take 15 minutes for coffee and a bagel, right?

We were home by 1100 hours and settling into a day of watching the NFL on TV.....first up was the game pitting the Broncos vs. Chargers in San Diego, which the Broncos won with another great defensive performance 17-3.  On at the same time was the game between the Seahawks and Vikings which was won handily by the Seahawks 38-7.  The afternoon televised game was between the Carolina Panthers and the New Orleans Saints in NO....it was a close game, but ultimately the still undefeated Panthers (12-0 now) won on a last minute touchdown 41-38.  The night game was between the Colts and Steelers and was thoroughly forgettable.....I turned it off early in the 3rd quarter......the Steelers won 45-10.....and it wasn't that close.  Like so many previously undefeated teams this year the Patriots lost for the second time in two weeks......they just have toooo many injuries and it is catching up with them now.

I was about to apologize for not having much to report, but then thought 'Why?'......I worked my butt off the prior 6 days of the week on projects, etc. and I deserved a day with zero accomplishments other than just relaxing and doing something that gives me a lot of pleasure.....watching football.

So, what is coming up for us this week?  Monday we go pick our car up from our mechanic, Tuesday we drive down to Yuma, AZ so TLE can visit our dentist (Dr. Urena) in Los Algadones, Mexico to have her crown made, and Thursday we have our annual optometrist appointments.  In between all that excitement I'll continue to whittle away at my 'TO DO' list.