First Saturday (Monday) was a good example of the routine we are settling into here in Riverside, CA.  I wrote my blog entry for the day, we had a latish breakfast, I made a run over to the Riverside Main USPS to drop off a Priority Mail Flat Rate Box containing a bike component I sold the very first day I listed it, and to pick up a bunch of the free Flat Rate Boxes (small, medium, large), then over to a Pedal's Bike Shop  (Yelp gives them 5 stars on 31 reviews, and I would concur) to have them remove the splined bottom bracket from the Tomac 98 Special frame.  I don't come across a lot of splined bottom brackets so I have never bought the tool you need to remove one.  They had it out in 2 minutes and I was on my way back 'home'.

Once I was home TLE and I headed out on a walk, which ended up totaling 3.5 miles round trip.  We made the 3.5 miles in 59 minutes flat.  Once we were back I headed out to the trailer to begin the final cleaning of the Tomac frame now that the bottom bracket was removed.  You may be wondering why I removed it.....well, it is an integrated piece that belongs with the TruVativ crankset, and I am including it in my eBay auction.  The frame really cleaned up nicely, and now that all the grime is off of it I can see that it has hardly been ridden.....the paint is virtually pristine!

Once that was done I headed inside to finish listing the last 10 items, including the bike frame, as well as wheelset.  Now it's time to sit back and watch the magic occur as people begin to bid on my stuff.  Within a week all that stuff now sitting in my trailer will be in boxes and on it's way to people who use and appreciate it.

Of course, first Saturday is MNF day, and the game of the week pitted the Detroit Lions against the N.O. Saints......both teams have been mathematically eliminated from the playoffs, so it was a 'nothing' game, and for much of the game it was very lopsided.....at one point it was 28-3....then the Saints began their comeback only to come up short losing 35-27.

While I was watching the MNF game a commercial for a new movie came on (The Hateful Eight) which has Kurt Russell in it.....seeing him got me to thinking about my favorite Kurt Russell movie......Captain Ron (a 1992 movie starring Kurt Russell, Mary Kay Place, and Martin Short), so I decided to watch it.  I don't have the DVD, but I am a subscriber to Netflix, Hulu and VUDU on our Phillips LCD TV, and I eventually found it on VUDU, so we sat down to watch it.....the time was 2230.  Even though we have seen this movie 7, or 8 times we still laughed all the way through it like we usually do.  The movie finished just before midnight.  That is still one of the cool things about being retired.......you can stay up way late, and midnight is way late for us, and just get up later the next day....where to we have to be?

The forecast for Monday evening was rain most of the night, and as I write it is still raining.....very gently, but raining nonetheless.  SoCal needs rain, so no complaint here. 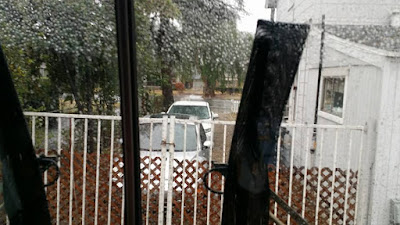