Once it warmed up above 40 degrees I went out to reinstall the passenger door panel on the VW, which took just a few minutes because I am becoming an expert after having done this now three, or four times.   However, when TLE and I drove over to hike to the top of Mt. Rubidoux again, she discovered I had forgotten to reattach the cable that when pulled by the inside door pull handle  opens the door......I had to open the door from the outside for her.  Yes, the Hockwald way rears its ugly head once again.....I had to take the panel off one more time to reattach the cable when we got home....yup, I am becoming an expert for all the wrong reasons.....:-)

We left around 1130 to take our 3.4 mile roundtrip hike to the top of Rubidoux averaging 3.7 mph for the entire walk and finished in just 55 minutes. 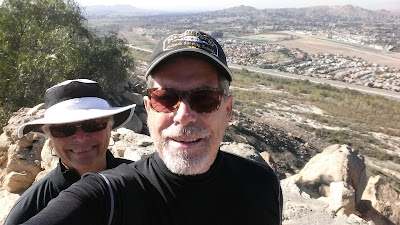 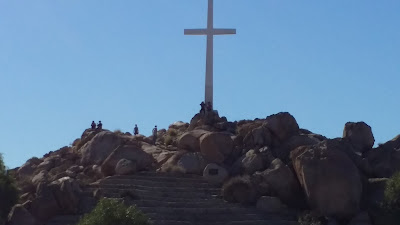 The 35' tall steel and concrete cross at the summit....erected to honor Father Junipero Serra

From there we drove over to the bank so I could get some cash out to buy a mountain bike off Craigslist to "part out" on eBay.  If you have been following my blog for a few years you know that on occasion, in the past, I have done this to make some extra money.  I can usually double my money spent on a bike bought on Craigslist by taking it completely apart and selling it piece by piece on eBay.....plus it makes me happy.

I headed over to meet the guy I was buying the bike from around 1340, and was home a littel after 1400 with the bike and began to dismantle it.  Within 3 hours it was in pieces......now I will clean each component, take pictures, and put them up for sale on eBay. 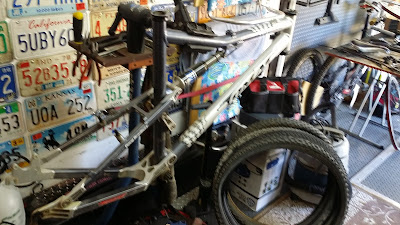 The frame is stripped 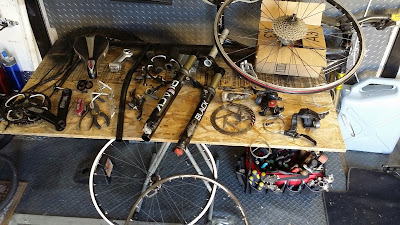 This bike really appealed to me because it came with three wheels, 4 tires, disc brakes, and rim brakes.  I'll spend part of Friday cleaning everything up, take pictures and then list them on eBay.

TNF featured the Tampa Bay Buccaneers at the St. Louis Rams.....the game was won by the Rams 31-23.

Thanks for stopping by!
Posted by Whatsnewell at 9:42 AM