I didn't write about the Santa Ana winds we had Saturday in my post yesterday, but pretty much all day Saturday and well into the night we had our first dose of Santa Ana winds this visit to SoCal.  Usually they are a phenomenon of the Fall, but we do get them in SoCal during the winter on occasion.  We had sustained winds into the high 20's with gusts into the 30's.  The reason I bring this up is we dealt with the aftermath of those winds Sunday morning.

I already knew I was going to have to disconnect the coach from the 30 amp electrical box at some point during the morning as Nick (son-in-law) needed to disconnect the box and remove the cable he had run to it while the home inspectors (the house was listed and sold in 2 days) did their inspection for escrow from 1000 to 1200 hours.  I went in the house about 0800 to find out when he planned to disconnect the power when he told me the wind had knocked the fence in their side yard down, and he would need my help to repair it before the inspectors arrived.  As it turned out the two 4 X 4 posts holding the fence erect had snapped off at the ground, so he had already been to Home Depot to buy two new posts, and other related hardware to fix the fence.  I haven't used a post hole digger since last summer, but I got to it while Nick hooked up the power tools.  I actually only had to dig one post hole as you can see from the picture below...... 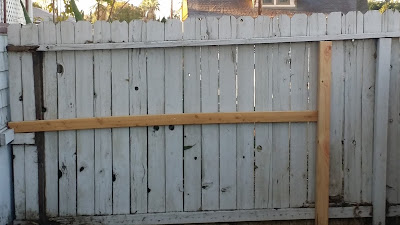 .....since we were not going to rebuild the fence, which really needs to be done at some point in the future by the folks buying the house, I suggested we use one new 4 X 4 post and brace the rest of the fence using a 2 X 4 anchored to the house.  It worked well, and stabilized the fence.

We had the fence repair completed by 0900, and then Nick disconnected the power.  I switched the coach over to the 2000 watt inverter, and for about 4 hours we pretended we were  boondocking.  We were getting enough sun into the solar panels in spite of them not being tilted, and a tree casting shadows on them, to run the TV while I watched the morning NFL games.  The big morning game had the Carolina Panthers at the Atlanta Falcons.  The Panthers were going for their 15 win of the year to remain undefeated, but they were upset by the Falcons 20-13.  So the 1972 Miami Dolphins remain the only NFL team to ever go undefeated and win the Super Bowl.

I spent the rest of the day watching lackluster NFL games, and answering questions of potential eBay buyers for items I had closing later Sunday, and getting many items ready to be packed and shipped Monday.....Monday will be a very busy day!

As is typical when we get winter Santa Ana winds the overnight temperatures get quite cold.....we've been getting low temps in the mid to low 30's each night....when I got up this morning there was frost on the awning mat.  Fortunately, we will be heading to the lower desert in a few days where day and night time temps are much more moderate.