More than a guess?

They're on a roll right now......I'm talking about the 'weather guessers'.......lately when rain has been predicted it rains.....maybe not very long, but it rains nonetheless.....and that is what is even more impressive to me.  It's one thing to predict rain when it's 100% chance all day long for two, or three days......that's a big storm, right?  But predicting accurately when a smallish storm cell is passing through, and that it will actually produce rain at a specific time is quite impressive.  On Real Saturday the guessers predicted a 60% of rainfall at 1800 hours and that is precisely what we got.....just like clockwork.

Yet again, naturally, I get slightly ahead of myself chronologically......Real Saturday dawned mostly clear, and balmy.  It was difficult to accept the forecast for rain by early evening, but it did arrive as I reported above.   While I busied myself with finishing the cleaning of multitudinous bicycle components TLE advised she was going shopping at Target and would be back shortly.....I looked at my watch and observed it was a little after 1000 hours......now let's be clear.....when TLE says she is going shopping at Target 'shortly' is not the proper term to describe her trip.  I replied back....."....right.....I'll see you later this afternoon....".....:-)

By noon time I had just about finished cleaning all the parts I will be selling with the lone exception of the Tomac 98 Special frameset, which I will clean Sunday, and it was time for a bike ride.  It was still quite sunny (it did not look like rain later in the day, or even the rest of the weekend) when I departed on my 10.23 mile ride, which, true to form, included a climb to the top of Mt. Rubidoux.  Each time I tackle the summit I can feel myself getting stronger, and riding a little bit faster.  I managed to average over 8 mph climbing the 3-4% paved grade to the top.....that's the first time I've surpassed 8 mph for the entire climb this time around.

Upon my return a little after 1300 hours to the coach I found that TLE had also returned.....hmmmmm......that was a fast trip by TLE standards, but she was not back until the afternoon, so I got that right!

The rest of the afternoon was spent (by moi) photographing each bike component to be listed for sale on eBay.  In all I ended up with 42 items to list......this total, as I wrote yesterday, includes a number of items from my personal inventory......I would say about half the items fall into that category.  I, apparently, had squirreled away enough parts to build another bike.....well, almost. 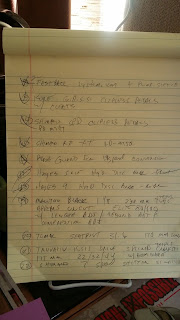 Page 2 of 4 pages of items to be listed

Once the picture taking was complete I began the task if listing the first 20 items on my list on eBay.  It took me until well into the second half of the NFL Saturday night game between the Jet and the Cowboys (won by the Jets with a last second field goal) to finish listing the 20 items.

By the way, on a side note.......I feel bad for the Cowboys.  They were expected to have a very good season this year, but since Tony Romo went down with his broken collarbone they have only won 2 games and lost 8, or 9.  They're not that bad, even without Tony, but they just keep losing.  They are down to their 3rd string quarterback now, and their hopes of getting into the playoffs have just about evaporated.

Other than her 'shortish' trip to Target, TLE spent virtually the entire day culling through her wardrobe, and getting rid of a lot of stuff we had been storing under the pedestal bed.  At one point I was unable to enter the bedroom there was so much stuff scattered everywhere.  I had forgotten we had half the stuff she pulled out from under the bed, so the choice to donate it along with the discarded items from TLE's wardrobe was easy.  I got so inspired by her efforts I thoroughly re-organized my underwear drawer.....okay, it's not much, but it's a start!

Thanks for stopping by!
Posted by Whatsnewell at 9:20 AM